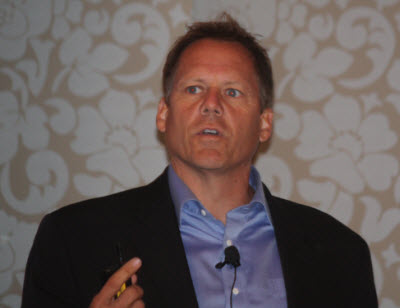 While Intel is known as the world’s biggest chip maker, but it also wants to be known as a leader in software.

The Santa Clara-based company made that clear today at an event in San Francisco. Intel representatives highlighted the company’s efforts in software, stating that Intel won’t sell as many chips if there isn’t an adequate software ecosystem across multiple platforms in support of Intel’s chip designs.

Doug Fisher, Intel’s vice president in charge of software efforts, said Thursday morning, “Software companies are reshaping the industry today.” He said Intel has been making software for 30 years, ever since the launch of its RMX real-time operating system in the early 1980s.

In recent years, Intel has made some big software purchases, including Havok physics in 2007, Wind River in 2009 and McAfee in 2011.

Yet Intel has had some setbacks in software, especially in the mobile arena. It started its Moblin operating system in 2007 as a mobile version of the Linux operating system. That became MeeGo as part of its alliance with Nokia, which was working on its own Maemo software. With Nokia’s CEO change, that alliance came to an end. And Intel’s support for MeeGo seems like it’s up in the air. But Fisher said Intel is “fully committed” to MeeGo and is open to new partners coming in to help develop the open software. (Rumors are floating that Samsung might acquire MeeGo).

Still, skeptics exist. One analyst, David Wu of Indaba Global Research, said he thought MeeGo seemed like it was “off to the orphanage.” He noted that Nokia’s big supporter, its former CEO, is out of a job, and Anand Chandrasekher, the big supporter at Intel, also left Intel this year.

The McAfee deal represents a renewed focus on using both hardware and software to lock down security of devices in an age when it seems like everything is getting hacked.

Fisher said Intel spends a lot of time working with partners to make sure their software runs well on Intel chips. But Intel is also focused on applications and ecosystem support. Intel has more than 90 tools for software developers. It works with 20,000 independent software vendors and touches 3,700 apps. The Intel software network has 14 million developers; and in the academic community, Intel works with 2,700 universities that have trained 350,000 students and 5,000 professors.

Lincoln Wallen, head of research and development at DreamWorks Animation, said that his own team works with 20 to 25 Intel software engineers to help the company adjust to a world of cloud computing and mobile apps. That includes making sure all the different platforms in the enterprise interact across a common hardware architecture.

All those moves are necessary to ensure Intel chips can be used in everything from servers to mobile phones. The full set of devices also includes desktops, laptops, netbooks, tablets, embedded devices and smart TVs.

“The power of the Intel architecture is its consistency,” Fisher said.

The importance of keeping up with software is clear. Overall, IDC estimates software will grow from a $316 billion business worldwide in 2011 to $428 billion in 2014. The direct app store sales business is expected to grow from 2 percent of the market, or $4.8 billion, to 5 percent, or $20 billion, by 2014.

While Intel touted its efforts in software, it reminded everyone about its close alliance with Microsoft. Speaking at the Intel event, Microsoft’s Stefan Kinnestrand, director of product management for Windows, said the companies continue to work closely on Windows 8, power-efficient processing, and security. On the other hand, the interests of the companies are clearly different. Microsoft’s Build event next week directly overlaps with the Intel Developer Forum. In other words, they will be competing for the attention of developers. Both companies said they were pressing hard to help developers, who face a lot of changes in the world of apps and now have much different expectations for revenue growth these days.