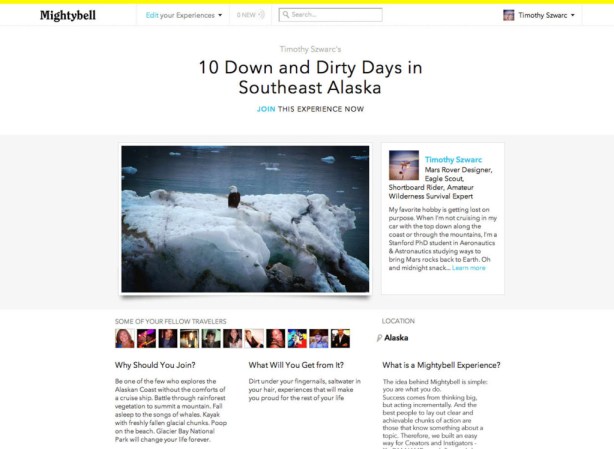 After serving as chief executive officer and co-founding build-your-own-social-network company Ning, Bianchini joined storied venture capital firm Andreessen-Horowitz as entrepreneur in residence. That was until she started work on Mightybell, an app designed to help people — quite literally — get things done, a little less than a year ago.

Mightybell is a web and iOS application that helps its users break down tasks into little chunks that are more manageable. That can range from something as simple as a shopping trip to a vacation in a remote area of Alaska. Mightybell aims to motivate users to follow through on their plans by providing support from a social community and by breaking down each action into smaller microsteps.

It starts with a creator, everyone’s “alpha friend” that knows where to go and why, Bianchini told me. The creators lay out a series of steps with some descriptions and photos. Those steps can be as simple as taking a photo or as complicated as buying a ticket on a specific flight to El Paso, Texas. It’s a pretty straightforward process, and a fun task that “alpha friends” should enjoy, Bianchini said. 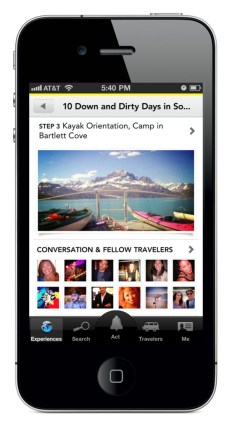 “What you do with the app is up to you. You make a step and turn the key — it’s about as quick as posting a status message,” she said. “Alpha friends tend to not go to places where they can’t find new ways to engage, this is a big way they can engage with them and find new fans.”

Bianchini and her team of nine (plus a summer intern) are opening the application up for a private beta today for those creators. They can start creating adventures on the site and they also get access to very deep engagement analytics. Mightybell picks up a lot of feedback along the way and can tell creators how long it took to complete each step and how many people skipped that step — along with the reasons why they skipped that step.

Casual users sign up to tasks in a similar way to signing up to groups on Facebook or following someone on Twitter. They complete steps as they see fit and can add feedback to each step if they want. That comes with the added benefit of getting help from other users on the same steps who might have suggestions of how to complete it in a more efficient or flashy way.

Brands can take advantage of Mightybell too, if they want, she said.

“How cool would it be for someone like, say, (outdoors store) REI, to create a camping adventure that starts with buying a tent there and ending at the store,” she said. “You get a brand benefit as a thin layer on top that’s almost invisible.” 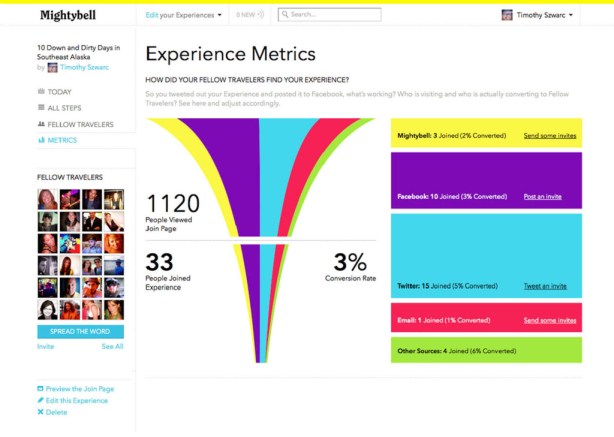 For now, Bianchini is fine working with her small team out of their Palo Alto office. You don’t really need a team with a thousand people to change the way things are done in the new era of web and social technology, she said. You don’t even need a few guys in a garage — you just need one person with an idea and a bit of scrappy fortitude to get it done, she said.

“You can make something that takes off like a rocket with just one person or two people,” she said. “The challenge is once you have that rocket ship is figuring out how to turn it into a massive 747 while it’s flying through the air — the skill set required to scale a company is very undervalued.”

That turned out pretty well. Ning is still around today and the most successful of the batch, Facebook, now has more than 700 million users.

“In periods of drastic change, weird stuff happens, we’re in another one of those seismic shifts,” Bianchini said. “Now we’re asking, how do you translate those conversations on the web into the real world, how does social software allow people to engage?”