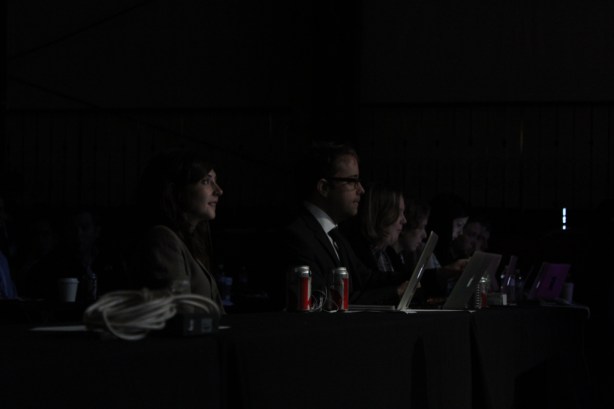 Above: TechCrunch writers Alexia Tsotsis and MG Siegler look on as Michael Arrington announces he is stepping down on stage.

It wasn’t long before the everyone found out the news of the day at TechCrunch’s annual Disrupt conference in San Francisco. Michael Arrington, founder and editor-in-chief of TechCrunch, had stepped down amid controversy surrounding his new investment fund, the CrunchFund.

The whole hooplah put a little bit of a damper on the show at first. But the mood quickly picked up once some of Silicon Valley’s most influential investors and power players took the stage with Arrington and his former co-workers, like new TechCrunch editor Erick Schonfeld and writer Paul Carr.

Then the startups that hope to completely reshape the industry took the stage. After all, that’s the point behind Disrupt — finding the next big thing that will disrupt technology as we know it. By the end of the day, we’d all but nearly forgotten that TechCrunch’s head honcho had checked out.

It’s not clear what direction TechCrunch will take with this new turn of events. Schonfeld has taken over as editor of the company, with Arrington focusing on his duties as an investor (although he will certainly be involved with TechCrunch in the future). But the team certainly knows how to put on a good show and generate a lot of buzz for the startups that they cover on a daily basis.