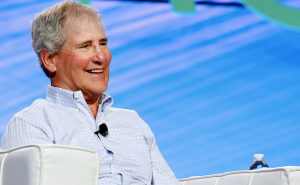 Updated: We’ve posted the video of Bill Campbell’s conversation with Brad Stone below.

Intuit chairman Bill Campbell is a legendary business adviser and “coach” to a generation of Silicon Valley entrepreneurs, including the founders of Google and Twitter. He’s also a former Apple executive who has served on Apple’s board of directors since 1997. Campbell isn’t one to talk in public very often, but he finally caved in to VentureBeat’s Matt Marshall.

“He got me in a weak moment,” said the notoriously private Campbell.

Campbell appeared onstage today at the Demo Fall 2011 conference with advice for executives and entrepreneurs, and stories of his friendship with Steve Jobs for a one-on-one chat with Brad Stone, a senior technology writer for Businessweek.

Stone asked Campbell about Steve Jobs and his recent decision to step down as CEO of Apple.

Campbell pointed out that Jobs managed to keep good people in their positions at Apple long after they’d become rich enough to retire or do anything else they wanted. He talked about how Jobs works around the clock and how Jobs’ battle with cancer landed him in a place he couldn’t run the company the way he wanted to.

According to Campbell, the most important thing for a company, whether it’s Apple or a startup, is to have a great product.

He also said founders are crucial to a company.

“You have to make sure you have good people in good positions,” he said. “And you need to manage them yourself.”

Stone asked Campbell if today’s companies are keeping up with the speed of companies that were created 20 years ago.

“I don’t think Silicon Valley isn’t tackling hard problems,” said Campbell. “It’s that the barriers to entry are a lot lower. A couple of guys can come out of Google or Apple and get $5 million in venture capitalist funding… those things happen all the time. I’m not sure what hard problems we are not solving.”

Finally, Stone asked Campbell if he has an iPhone 5. “If I had one I would leave it in the bar,” he said with a laugh.

Campbell not only sounds like a coach (and he has the sunglass tan lines of a sideline coach), he was the head football coach at Columbia University for six years. When he talks, it’s like being in a locker room. You want to run out of the conference and go beat the other team.

Campbell has held the Intuit chairman’s seat since 1998. His resume is, shall we say, impressive. He has almost three decades of experience in some of Silicon Valley’s most successful companies. That experience has helped make him an adviser to entrepreneurs, including the founders of Google and Twitter. Prior to serving as chairman at Intuit, Campbell was CEO of the company. It was during Campbell’s time as CEO that Intuit created web-based finance leader Quicken.com.

Three years before joining Intuit, Campbell was the president and CEO of pen-based computing company GO Corporation. Before that he founded Claris Corporation, which was bought by Apple in 1990. And before Claris, starting 1983, Campbell was at Apple. He started as a the vice president of marketing  and in 1995 he was named group executive of the United States.