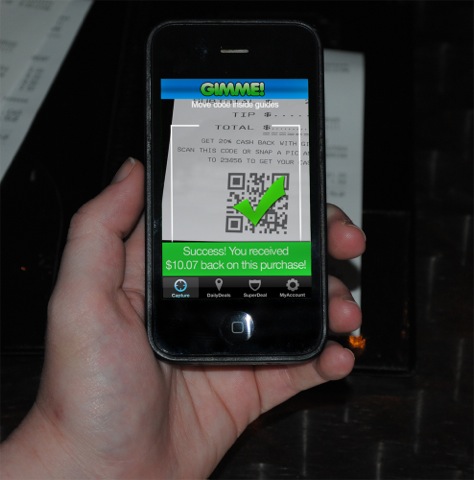 I hate those printed coupons that come along with my grocery receipts. They’re too easy to forget or lose and too hard to redeem. I also hate loyalty cards, mail-in rebates, and all the other tricks that retailers use to come between me and the discounts they’ve promised.

Now a startup with the pleasingly direct, almost rude name of Gimme (the founders spell it Gimme!) has a solution: Print a scannable QR code on the coupon and let customers redeem their coupons right on the spot with their mobile phones.

The company announced its product today at Demo Fall 2011, a product showcase in Silicon Valley.

“From a consumer perspective, it’s hard to really feel a sense of loyalty for a business if you’re constantly clipping coupons or printing vouchers,” said Gimme CEO Steve Basmaijan. “Eliminating the need for coupons and vouchers while still providing discounts made a lot of sense.  Plus, who wouldn’t want cash back at places they love to shop and dine?”

The system works for cash rebates, too. Instead of having to mail in a rebate code, you just submit the QR code on the receipt and get cash back on the purchase, right on the spot.

Gimme might sound like just another one of a zillion daily discount services, like Groupon, Living Social and others. But its emphasis on making redemption easy, while encouraging repeat visits, is an interesting twist on the discount model. Basmaijan says that the problem with daily deals sites is that they provide no incentive for return visits.

“Group purchase discounts are great at attracting customers, but horrible at retaining them,” Basmaijan said. “Businesses trying to promote products or services solely through group deals would be the same as building a house only using a hammer, it’s just one tool, and you need more than one tool to build a house.”

The model is similar to DailyGobble, which lets consumers get cash back by snapping photos of restaurant receipts. According to Basmaijan, DailyGobble struck more than 500 partnerships with restaurants in New York and San Francisco just three months after launching, so he’s confident that he can pull off a similar trick with Gimme.

Gimme’s system is set up to let customers redeem discounts using any device with a camera and internet connection. Customers can submit QR codes by scanning them via the Gimme app (soon to be release on iOS and Android), through third-party barcode-scanning apps or by sending in a picture message.

For businesses, the company’s software can integrate with the existing point of sale system. Business customers can also access it through a web portal or a tablet app.  The software communicates with Gimme’s back-end infrastructure to generate a unique code for each transaction.  These codes are printed at the bottom of the receipt upon the completion of the sale.  Gimme’s infrastructure is based on a combination of Java, Scala, Play Framework and MySQL.

The risk is that Gimme’s technology might be too easy for another, larger company to reproduce. If the founders are smart, they’ll be filing patents on some key aspects of their business process or technology right now. Otherwise, it’s just a matter of time before we see GroupOn (or Google) offering QR code rebate redemption.

The company was founded in 2011, has just three employees, and is based in Coppell, Texas, about 25 miles outside of Dallas. It has been bootstrapped so far, with just $10,000 in funding from the founders and their friends and family.

Gimme is one of 80 companies chosen by VentureBeat to launch at the DEMO Fall 2011 event taking place this week in Silicon Valley. After our selection, the companies pay a fee to present. Our coverage of them remains objective. There’s still plenty to see at DEMO, and VentureBeat readers can get a special discount on registration for the remainder of the show at demo.com/VBDay.