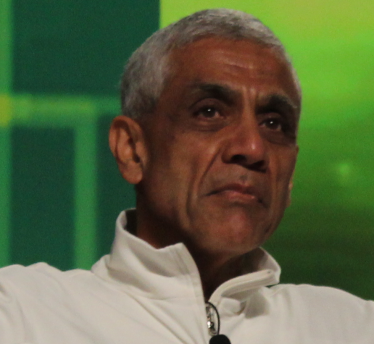 “I don’t like being one of the venture capitalists … everything is a deal to them.”

That’s what storied investor Vinod Khosla said on stage at TechCrunch Disrupt 2011 on Tuesday. He is considered a venture capitalist by most as he has invested in companies like GroupMe and Jawbone, but he’ll deny that any day of the week, he said.

“I am a venture assistant. I want to help out entrepreneurs with what they actually need,” Khosla said. “It doesn’t matter what you call it, a great entrepreneur needs more than money, they need help.”

Khosla and his firm, Khosla Ventures, is particularly known for investing in clean technology. But clean technology investing has hit a few hiccups lately, with investments in cleantech companies slowing in the second quarter this year. PayPal co-founder Peter Thiel said clean technology was a “disaster” on stage at TechCrunch Disrupt 2011 on Monday.

“Cleantech is not a disaster, just in the last 12 months we’ve generated over a billion dollars in profits and three IPOs, and there are six IPOs ready to go if the markets hold up,” Khosla said. “I challenge anyone to claim that cleantech done right is a disaster, we’ve generated more profits than anyone has.”

When Khosla left storied venture capital firm Kleiner Perkins Caufield & Byers in 2004 to invest in clean technology startups, he swung for the fences. Khosla was known for taking a “portfolio” approach to cleantech investing by dropping money in just about every potential part of the budding sector, from biofuels to smart grid companies.

His firm has also invested in some information tech companies like group texting service GroupMe. Khosla himself is an investor in payments service Square, and Khosla Ventures has a partnership with the Designer Fund. But, again, those investments were focused on the team — not the product and not for the sake of making a deal, he said.

“We are clearly investing in (Square chief executive) Jack (Dorsey),” he said. “I’m a big, big fan of design, and I don’t think startups use them enough, and that starts with the entrepreneurs.”

Khosla also said he’s a fan of Foodspotting, a food discovery application, and some other off-beat interesting revenue models and ideas. One of those is a “high-tech burger company” he calls “Meat 2.0.”

And yes, he’s serious about it. That company saves money and saves greenhouse gases by increasing the efficiency at which plant protein is converted to animal protein in meat.

“We’re doing Meat 2.0 for god’s sakes, re-invent the hamburger,” he said. “This is real science. It’s a stealth hamburger company.”