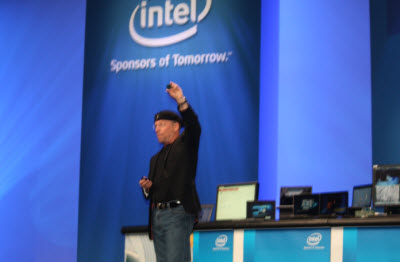 Haswell isn’t scheduled to ship until 2013. But it is being tested now and is running in a computer at the Intel Developer Forum in San Francisco. The chip is two generations away from today’s chips on the market, but the fact that it is running today suggests that Intel will be able to stick to a punishing schedule for releasing major upgrades of processors every year.

Eden (pictured holding chip), vice president and general manager of the PC Client Group at Intel, said in his keynote speech at the company’s developer conference on Wednesday that Haswell will be able to operate on 20 times lower connected standby power when it ships in 2013.

The chip will power the 2013 versions of Ultrabooks, the super-thin MacBook Air-like laptops (but more affordable) that Intel has been touting since the summer.

Ultrabooks shipping this fall will run on Intel’s current Core microprocessors. In the first half of 2012, Ultrabooks will ship with a chip code-named Ivy Bridge. And by 2013, Ultrabooks will ship with the 22-nanometer Haswell chips. Haswell will be power efficient enough to be in a laptop with all-day battery life, but it can effortlessly run multiple applications at the same time. Haswell chips will have 10 days of stand-by battery life.