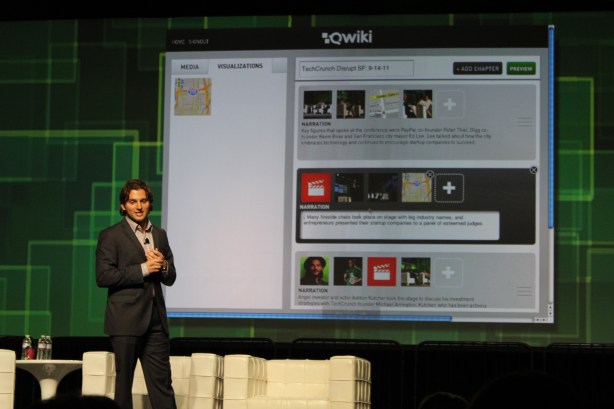 The Qwiki editor takes content such as text, videos and photos, and lays it out in a neat presentation. It’s a drag-and-drop process that’s run in a web browser. The end result is a several-minute presentation, similar to the existing Qwiki articles, that a company can post to the web. Anyone on a device running the iPhone iOS operating system, Android or HTML5 can view the presentation.

Qwiki articles capture reader attention for an average of 6 minutes and 30 seconds on the web and 19 minutes on the iPad, Qwiki co-founder Doug Imbruce told the TechCrunch Disrupt audience on Wednesday. That’s well above the engagement level for many other websites, which usually only measure as high as 2 to 3 minutes. iPad users have downloaded Qwiki’s iPad app more than 500,000 times.

“As a result of this engagement, 800 companies have reached out to Qwiki and want to put their content into the Qwiki format,” Imbruce said. “We’re going to tap into that.”

The service feels like it’s from the future. Actors asking questions to a computer and getting large swaths of visual and spoken information back is common a sci-fi trope in movies like Wall-E, and that’s exactly what Qwiki does (though with less Sigourney Weaver). Users type something in Qwiki’s search bar and get a two- to three-minute clip of spoken information and a few pictures or videos.

Qwiki launched its private alpha at TechCrunch Disrupt, an industry conference, in September 2010 and raised $9.5 million from the likes of Facebook co-founder Eduardo Saverin in a short few months. The service got more than a hundred thousand requests to join the private alpha, according to a spokesperson for the company.

Qwiki has around 3 million topics in its database, ranging from geographic locations such San Francisco to actresses such as Natalie Portman (though being a math nerd, I went straight to pages with information on meromorphic functions and the Riemann-Zeta function). The information presented is surprisingly comprehensive without throwing out the overload of facts that might pop-up on some of the larger Wikipedia pages.

Qwiki was the darling of last fall’s TechCrunch Disrupt 2010 competition for start-ups, winning a $50,000 prize and the Disrupt Cup. Qwiki was also the runner-up for best technological achievement at this year’s Crunchies awards — an academy award-style ceremony for start-ups and entrepreneurs in Silicon Valley.