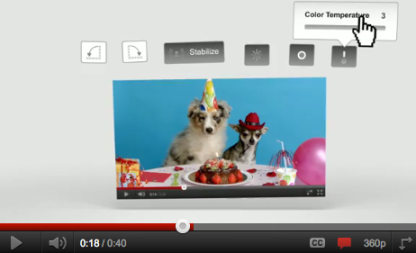 YouTube is rolling out new video editing features for users uploading videos to the site, the company announced Wednesday.

While the new YouTube video editor isn’t on par with professional editing software like Final Cut Pro, it will let users perform simple fixes to improve the quality of their videos.

Some of those simple fixes include trimming a video clip (beginning and end only), rotating, adjusting brightness and contrast, color adjustment and — perhaps the most useful editing feature — video stabilizing (for those shaky clips where the camera couldn’t seem to stay still). For people who are even less inclined to edit video, the new editor also has an option to automatically tweak all the problems with an uploaded video clip.

This isn’t the first time YouTube has offered its users a way to edit video. In 2007 the Google-owned site launched the Adobe Premiere Express-powered YouTube Remixer, which later evolved into a JavaScript-based video editor in June 2010 that was available through the service’s TestTube labs.

Unlike the company’s previous efforts, the new video editor actually lets you edit the video within YouTube itself, eliminating the time-consuming process of re-uploading the video file every time you needed to make a change. The original video, however, remains intact and available to download.

Another feature worth noting about the new video editor is its selection of 14 style effects, which was developed in collaboration with Google-owned online photo editing app Picnik. The effects are very similar to photo sharing service Instagram’s photo filter options (see image below). They let users stylize their videos by using black and white, sepia tone, or several other options.

The new video editing features will roll out to users today. Check out the YouTube video embedded below for a demonstration.