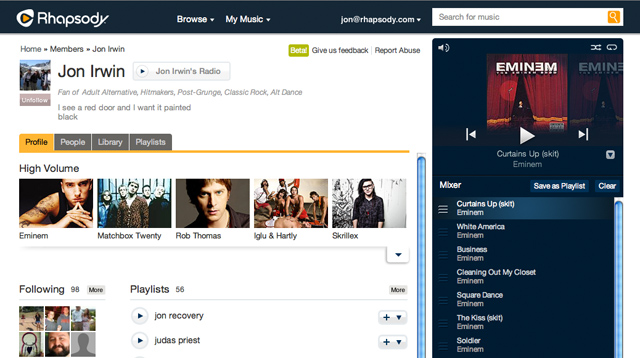 Not to be left out of the streaming music hubbub this week, music subscription service Rhapsody announced today that it has added Facebook and Twitter integration to its web service as well as an improved radio recommendation engine.

Rhapsody is one of the oldest players when it comes to on-demand streaming music and has come under fire recently from the likes of Spotify, MOG, Rdio and Grooveshark. The company likely hopes adding social features will help it stay relevant in a constantly evolving landscape. Rhapsody is also rumored to be launching some sort of partnership with Facebook next week at Facebook’s f8 conference.

The biggest aspect of Rhapsody’s announcement today is stronger integration with social networks. Users will have the ability to see playlists and songs played by their Facebook friends and let Facebook friends see their musical tastes even if they aren’t Rhapsody subscribers. Facebook “Like” buttons will also now appear throughout the service’s web interface.

“Rhapsody members can now tap into a music community that is 800,000 members strong to share, recommend and find music,” said Rhapsody president Jon Irwin, in a statement.

The company also has a new “My Radio” feature, which will let users hear a mix of the latest 150 songs a friend has been listening to. In addition, Rhapsody will provide access to the profiles of the company’s “Editors,” music journalists who offer curated playlists of the newest buzz-worthy music and old favorites.

Rhapsody spun off as an independent company last year after being part of RealNetworks, a once-large media company that has had much trouble in recent years. In March, the RealNetworks’ CEO resigned after only being with the company a little more than a year.

Are you a fan of Rhapsody? Do you think it can stay relevant in the new streaming music landscape?