BlackBerry smartphone maker Research in Motion’s revenue fell significantly this quarter, due to lower sales of its newest tablet computer, the BlackBerry PlayBook, and shy consumers waiting for the BlackBerry 7 phones that launched three weeks before the quarter ended.

Research in Motion (RIM) brought in $4.2 billion in revenue this quarter, down 10 percent from $4.6 billion in the second quarter of 2011 fiscal year, the company reported in its quarterly earnings on Thursday.

“PlayBook sales were well below expectations,” Research in Motion co-chief executive Mike Lazaridis said. “PlayBook has established itself as a high performance tablet, which we believe will be successful in a market in its infancy but is rapidly growing.”

The company’s costs remained steady at $2.6 billion, sending its net income for the second operating quarter of its 2012 fiscal year down to $329 million from $797 in the same quarter a year earlier — a 59 percent drop. Research in Motion spent $780 million on patents from Nortel. 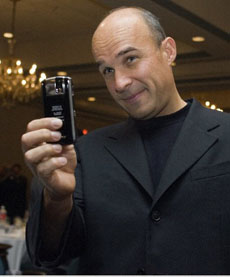 The company said in its last operating call that it expected to release its next generation of high-end smartphones, called QNX smartphones, early next year. But Lazaridis dodged a question on the call asking whether that launch window was still open.

Here are the highlights from the company’s earnings conference call: