The environment is almost like a character in the story too. The Earth has been reimagined as place that is being terraformed by the aliens into a place of human ruins and ice. You have to battle through bombed-out buildings, industrial factories, underground mines, and a snow-covered and completely ruined New York. When a screaming alien jumps out of a hiding place to attack you, it’s quite scary. So you approach corners with caution, and you have to constantly reload your weapons to be ready to unload on ambushers. Sometimes, Insomniac puts the fear in you by letting you roam around for a while before unleashing the ambush on the player. That builds up suspense and more fear for the player. Overall, that contributes to the game’s adrenaline rush.

The environment is part of the game play in a lot of ways. You have to board a train and fight off attackers chasing alongside the train. You can ride zip lines to get from one spot to another. And you have to hide in small passageways in a mine to escape a giant worm.

Insomniac’s artist have created beautiful clouds of dust, fire, smoke, shadows and lighting. The irony is that while these are some of the best 3D graphics you’ll see in a game, nothing is pretty. The atmosphere is dark and depressing. You’re using sophisticated weaponry, but the capacity to build these kinds of weapons has long been destroyed. Salvage is what the survivors dwell upon. In the battles over these pieces of dirt, you get the sense that the humans and Chimera have already destroyed anything that is useful on the planet. There are also moments when the music comes into the foreground of the game, delivering an emotional punch in an action scene. There are a few games that do this well, like Gears of War and Halo Reach, where the developer is trying to convince you that there is just no hope left and that you, the player, are the only person that could possibly turn things around. 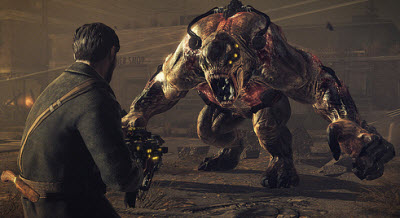 A weapon for every occasion

The beginning battles in Haven, Okla., start more as training sessions for the player. You learn how to use basic weapons and find new ones as you progress. When you pick up a new weapon you haven’t used before, the game pauses and shows you how to use it. It tells you which buttons to press and plays a video of the weapon in action.

Each time you get a new weapon, it appears on a weapon wheel. You can access that wheel by pressing and holding the triangle button on the controller. That pauses the action and gives you time to think about exactly which weapon you should use. If you simply tap your triangle button, you switch to the weapon you were just holding. This is important because you’ll often want to switch quickly between short-range weapons like a shotgun and long-range weapons like a sniper rifle.

Stealth pays off. If you can quietly bludgeon the Chimeran guards before they sound an alarm, your job becomes easier. So it’s important to try to find side paths that will take you around a firefight, rather than directly into one. But the Chimera are smart enough to hunt you down in packs and outflank you. They can pin you down and surround you before closing in for the kill. Sometimes the enemy artificial intelligence is stupid, but they still wind up killing you a lot. If you just charge into a group of Chimera, they’ll eat you alive. So you have to think about how to hit them.

I played the game on the hardest “difficult” level. That meant that I often died and had to replay levels multiple times in order to beat them. Each time, I had to think about the combination of weapons, ammo, and paths in order to defeat the enemy. You have to use your ammo sparingly, since you have to scavenge it and look off the beaten path to find weapons caches. You can constantly recharge your health too by picking up health packs.

The weapons are fully upgradeable and come with interesting perks or problems. The weapons become more powerful the more you use them. The Auger rifle is a case in point. You can hit the R2 button on the controller to set up a shield with the Auger. And if you hit the left button, the Augur will let you see the outlines of enemies that are hidden from view, hiding behind buildings or objects. That helps reveal enemy ambushes. Every weapon comes with a cool additional feature that you can activate by pressing R2.

The Auger doesn’t have a lot of bullets and its projectiles move slowly compared to other weapons. But the cool thing is that they can go through walls and you can use the Auger to shoot enemies who are waiting to ambush you. When you level up with the Auger, it fires three projectiles in one shot. You can easily beat the enemy if you know where they are. But if someone is charging you, you don’t want to get caught with an Augur or a sniper rifle. 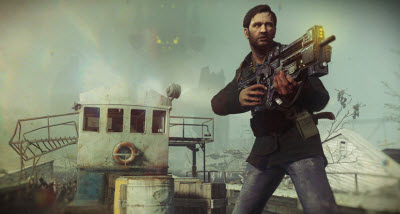 The new Deadeye sniper rifle is one of the most handy weapons. You only get 20 bullets, but you can use it take out an enemy with one shot. You can fire on the enemy from afar and vaporize the enemy’s head. The Marksman sniper rifle usually requires two shots to kill the average Chimera, so the Deadeye is welcome on many occasions. But the Marksman will let you drop a sniper bot in a location across a distance so you can set up a killing zone and a distraction for enemies. Even the little .44 HE Magnum handgun is useful, as it can fire shells that explode when you pull the R2 trigger.

I enjoyed weapons such as the Atomizer, which shoots out lightning bolts at enemies at relatively close range. I used the Deadeye a lot as well as the M5A2 Carbine assault rifle. The Bullseye was also useful, as you could fire a tag at an enemy, like one of the flying Chimera known as Long Legs. Once the tag hits the enemy, every shot you fire is drawn automatically to the tag. So even without aiming, you can let loose on the trigger and take out a tagged enemy as they are moving. The Rossmore shotgun was surprisingly useful because it could fire flaming shots after leveling up. It’s always good to give the enemy a light. Overall, the weapons I used most were the Deadeye and the M5a2.

Grenades are also useful. The Hedgehog grenade sends out spikes in all directions, while the EMP grenade takes out the energy shield of an enemy. There are some tank-like enemies that you can’t even engage until you take out their shields. You can also lob a Molotov cocktail at groups of Chimera and set them on fire. The core fun of Resistance 3 is that in any 30-second period, you have to shoot, switch weapons, move, and switch weapons again to protect yourself at close range.

If all this talk about weapons seems a bit much, keep in mind that in the Resistance games, just like in the Ratchet & Clank games that Insomniac also makes, the weapons are always the stars of the show. Fortunately, in this case, the human characters and stories are also interesting. While the weapons seem like they’re really powerful, so are the enemies and their bosses that you have to fight. 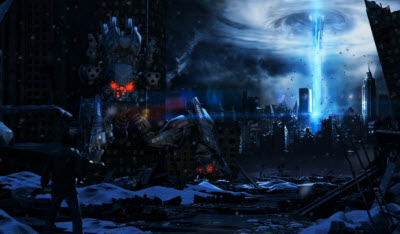 All enemies great and small

The wide array of weapons is necessary to deal with the variety of enemies and their behavior. The standard Chimera soldiers, or Hybrids, require a few shots to take down, unless you get them in the head with a single shot. But they become a lot harder to deal with if they are protected by shield drones, which fly above them and then shield them from all attacks. You have to shoot out the drone first before you can take out the soldier. That’s a waste of ammo, but it’s absolutely necessary before the invulnerable Hybrids close in on you and start a melee fight.

Among the new enemies are the Grim, or zombie-like creatures that hatch from cocoons and charge you in packs. You have to fire your shotgun at them, hopefully killing them two at a time but almost always in the nick of time before they rip you to shreds.

The Long Legs version of the Chimera are tough to deal with because they can jump huge distances, flying to the tops of buildings and taking you out with sniper rifles. They can outflank you simply by jumping right behind you, so you have to be paranoid in firefights with them by always checking your back. 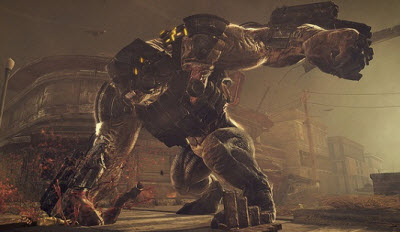 The escalation of the battles leads you to tougher enemies such as Ravagers, which carry energy shields and fire with Auger rifles. Attacking them is like shooting at a tank, and you often have to use a lot of grenades or sniper bullets to take them down. Bosses include a giant underground worm, spider-like creatures, and Brawlers (pictured right, which go berserk and charge you with all their might. The best thing to take the Brawlers down are rockets and grenades. But if you plug them with enough high-explosive Magnum bullets, you can do some real damage to them. Brawlers are pretty unnerving, as you feel like you’re being chased by King Kong. But if they’re not charging, they’re a little slow.

The real difficulty of the game is that the different enemies often appear in packs, so you have to switch weapons constantly to take out the enemy that is the most threatening to you at any given time.

One of the surprises of the game is that you wind up having to fight other humans. It’s one of the twists that is understandable. As the end of the world approaches, it’s only natural that survivalist groups emerge with an “everybody for himself” attitude. That part of the game is a glimpse into the dark side of human nature.