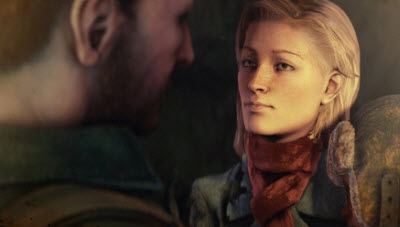 Most video game series end after three titles, but it’s not clear if that’s the case with Resistance 3. The ending leaves room for more games, though the Chimera do get a pretty good kick in the butt this time. If it is the conclusion, then the ending is pretty fulfilling. You won’t be left with an unsatisfying cliffhanger or a hint about the next installment in the series.

Resistance 3 is the first in the series to support 3D viewing and the PlayStation Move, but I didn’t bother with either. I don’t have a 3D TV and I’m not happy with how they display images now, based on a lot of bad demos I’ve seen. As for the Move, I can shoot more accurately using an old-fashioned controller. The game did crash on me twice, but that’s nothing to worry about, as it automatically saves and returns you to a previous point in the action. It wasn’t enough to hurt the overall experience, which was a memorable way to start this fall blockbuster season.

With Capelli’s need to protect his family, the Resistance series is finally doing a better job of making you care about its characters. For the most part, the best blockbuster games always give you something more than just pure adrenaline action. That combination of great story, graphics, art, action, sound, and setting makes them modern technological and artistic marvels. It’s harder to do these kinds of games in the current environment of slowing console sales and the rise of platforms such as Facebook, the iPhone, tablets, and casual titles that steal time away from the audience for console games. But I’m glad that Sony and Insomniac Games have stayed the course in creating one of the best games of the year so far. I give it a rating of 90 out of 100.