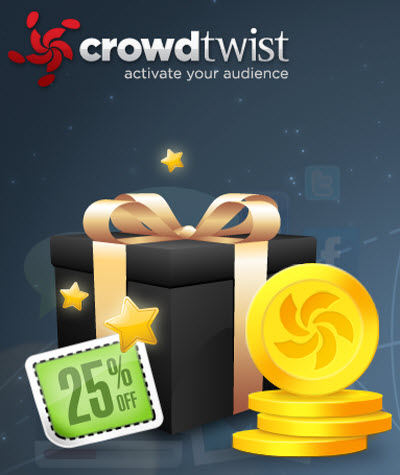 CrowdTwist has raised $6 million in venture funding for its platform that gamifies brand loyalty and rewards programs.

CrowdTwist is one of a number of startups built around gamification, or using game-like features such as reward points to enhance engagement and traffic for non-game applications. The company and its rivals say they can help brands reap bigger revenues and engagement by helping users to have more fun and using modern analytics to measure and tweak results. CrowdTwist’s existence suggests that loyalty programs are now in a state of flux after many years of traditional marketing practices.

CrowdTwist has created a platform that helps engage a brand’s audience both online and offline. It gives brands the ability to track, incentivize, and reward customer engagement across online, social, and mobile channels. It helps a brand identify the people who influence others’ perceptions about the brand the most, and it helps brands understand how someone interacts with the brand.

“Loyalty is no longer focused on a singular transactional moment and transactions are no longer strictly monetary,” said Irving Fain, chief executive. “Consumers are tweeting, posting, sharing to social streams, walking into stores, checking in on FourSquare. All of these actions have value in today’s world.”

And while fragmentation across a lot of platforms is hurting a brand’s ability to deal with consumers directly, CrowdTwist is making it easier to address users across those platforms. CrowdTwist believes that its approach to gamification will show it is possible to make consumers more loyal in the long-term.

New York-based CrowdTwist counts JCPenney and Live Naion among its clients. The company claims it has increased the average time users spend on its clients’ sites by 250 percent, has increased average pay views by 450 percent, and has upped average purchase size by 30 percent. It has also generated tens of millions of earned media impressions for its customers, it says.

SoftBank Capital and Fairhaven Capital led the first round of funding for CrowdTwist, which recently graduated from the first class of the TechStars‘ New York incubator. Kbs+ Ventures, Bertelsmann Digital Media Investments and several individual investors also participated in the round. CrowdTwist helps a brand identify which social media are contributing most to sales, said Joe Medved, a partner at SoftBank.

CrowdTwist connects the various properties a brand can establish, such as its primary web site, online and offline points-of-sale, email, Facebook, Foursquare, Twitter, and other platforms. Then it rewards customers with points for any kind of brand interaction across the different channels, including linking to their social media accounts. Users can get points for sharing content or writing reviews and ratings. As customers get points, they can earn real-world rewards. CrowdTwist provides clients with an analytics dashboard that gives a window into data about individual customers.

As an example, CrowdTwist said it worked closely with JCPenney on its “Pennies from Heaven” social cause marketing campaign. From mid-July through August, the campaign was integrated across social and mobile platforms, connecting the brand and its users via Facebook, Twitter, the online store, a mobile app, QR codes and more. Users could check in at over 1,500 JCPenney stores to earn pennies. The campaign generated 3.4 million social impressions, and 20 million pennies were donated as a result of the campaign. JCPenney donated $1 million to afterschool youth programs.

CrowdTwist has 10 employees. It was founded in 2009 and launched its platform in 2010. Fain and CrowdTwist’s chief operating officer Josh Bowen met at Clear Channel and, after they left, connected with chief technology officer Mike Montero. They recognized that Clear Channel’s existing loyalty platform was good at driving consumer engagement, but specific user actions weren’t tied to delivering a brand benefit. As a result, it was hard to understand the difference between true fans and fickle fans. They conceived CrowdTwist to improve engagement and make it measurable.

Rivals include BadgeVille, Bunchball, BigDoor and others. CrowdTwist’s customers include Sony, the X factor, Live Nation, JCPenney, and Zumiez.