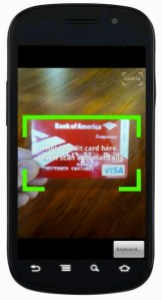 The last time we checked in with Card.io there was a major hole in the company’s software-based credit card payment solution for smartphones: There wasn’t an SDK for Android.

Today Card.io is changing that by making its optical character recognition credit card reader available to Android developers. This is an important step for the company because it’s targeting software developers, not merchants or consumers, with the technology.

Founded by former AdMob employees Mike Mettler and Josh Bleecher Snyder, San Francisco-based Card.io has become popular with iOS developers since its platform launch in June 2011. More than 80 apps have integrated the Card.io SDK and the company says more than 750 new developers have signed-up.

“We’ve been thinking about where the need is,” says Mettler, CEO of Card.io in an interview with VentureBeat. “And Android has far fewer people signed up with mobile wallets.”

He points out that his biggest competitors have been Google, Apple, Paypal and Square. It’s a crowded field of competition, but Mettler hopes Card.io will appeal to developers because it does not require consumers to change their habits or any hardware.

Perhaps the biggest risks to Card.io’s success are mobile wallets in general, which are predicted to put an end to physical credit cards by 2013, according to experts. This will eventually make the need for an optical reader obsolete. Until then, Card.io’s visual solution for mobile payments is tough to beat.