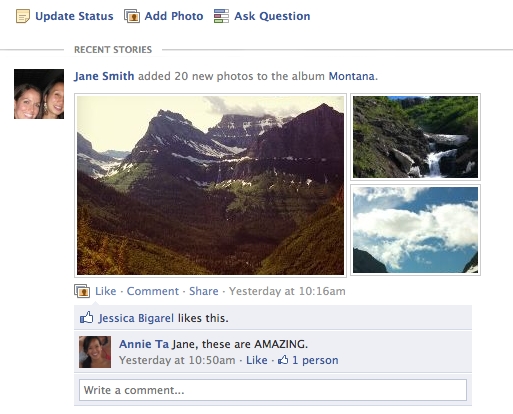 Facebook today unveiled three new features aimed at making it easier to keep up with your friends’ most important and most recent updates.

The first feature is an adjustment to the site’s news feed (the list of updates from your circle of friends). In the past, this list was displayed in strictly reverse chronological order, with an option to switch between “Top News” and “Most Recent” options. Now, Facebook is merging the two views, so the top of the news feed always shows the updates that you will find most interesting, according to Facebook’s estimates.

Facebook will adjust this list depending on how long it’s been since you last visited Facebook. If you were on the site a few hours or a day ago, it will show a wider sampling of recent updates. But if you haven’t checked in for a week or more, Facebook will prioritize the display to show the updates most likely to interest you.

Below the selected top news items, you’ll be able to view the full, reverse-chronological feed of all updates (what used to be called the Most Recent view).

“What this is about is making sure you can accomplish two goals,” Mike Schroepfer, Facebook’s vice president of engineering told VentureBeat. “One is making sure you don’t miss anything critical. And then when you want to see more, you have an easy way to do that.”

I asked Schroepfer how Facebook decides what I’ll find interesting.

“We look at hundreds or thousands of different signals,” Schroepfer said. For example, the company’s algorithms look at who has published an update, how much engagement it’s generating, how many comments, and other signals. In addition, you can easily click on an update to tell Facebook that it’s not relevant to you, or to flag an update from the chronological feed that you’d like to see in the top news section.

“We’re continuously changing and tuning the ranking,” Schroepfer said. Like Google with its PageRank algorithm, however, Facebook wasn’t about to give me more specific details.

Second, Facebook is increasing the default size of images shown in the news feed, making them twice as large by default. The underlying images are bigger, thanks to recent changes making them 960 pixels wide, so Facebook has more pixels to work with. 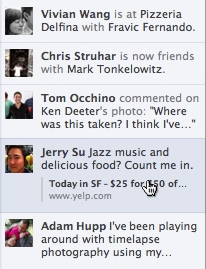 The third feature is called Ticker, which displays short versions of your friends’ updates in real time. For people who live on Facebook (and you know who you are), this display gives you more immediate notifications about what your buddies are up to, whether that’s a post, a shared photo, a check-in or a comment.

You can click on anything in the ticker to see the full update and add your comment, then go back to whatever you were doing in Facebook.