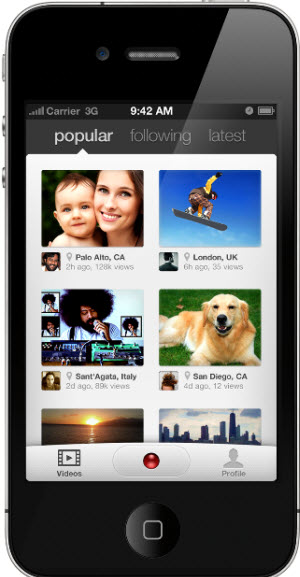 Watching videos on smartphones is getting more and more popular. But it isn’t necessarily getting easier and easier. That’s where Klip comes in. The mobile video startup is launching an app by the same name today that reinvents the way you watch video on a mobile device.

The app could help us deal with the flood of video coming to the web. Cisco predicts that there will be 7.1 billion mobile connected devices by 2015, or one for every person on the planet.

The Klip app organizes your videos and the videos of your friends in real-time, making it easy for you to watch and share videos. One cool feature is that you can swipe your finger across a video cover image and then watch still frames of the video appear from throughout the video. Just by swiping your finger across an image, you can see at a glance whether you really want to watch that video or not, said Alain Rossmann, chief executive of Klip, in an interview.

Klip also immediately starts playing a video when you tap on it, eliminating the buffer time and other delays that stop you from watching a video instantaneously. When you want to want to scroll through a collection, you just flick up or down and the thumbnail video cover images run fluidly across the screen. Some of these features are present in Apple’s programs such as iMovie and iPhoto, but Klip takes some of those best features and makes them generally available as an app.

You can share your videos on Facebook, Twitter, email, or your own YouTube channel with a single tap. It’s easy to watch “klips” from around the world and follow other “Klippers.” You can “like” content shared by friends easily as well. It all happens fast, Rossmann said, because Klip has invested heavily in having a fast backend infrastructure, or cloud technology.

Rossmann says Klip addresses video discovery, fast playback, and adaptive video streaming. The latter checks your device’s internet connection every few seconds to determine how fast it can play back video for as smooth an experience as possible. The user interface is strikingly simple. The response time is about 100 milliseconds, or essentially a split second. You can find content via hashtags, much as you can on Twitter. And once you find something you like, you can use it as a channel for finding similar things. The popular hashtags that you follow appears as buttons you can tap at the top of the user screen. The thumbnail pictures for videos are never pure black or blue; they’re always a picture of something in the video.

Global smartphone shipments are expected to hit 1 billion annually in 2016, up from 302 million in 2010, according to Juniper Networks. And today, two-thirds of smart phone users say they have watched video on their devices. Market researcher In-Stat forecasts mobile video consumption will surpass 693 billion minutes by 2015.

Rossmann founded Palo Alto, Calif.-based Klip in April and raised $2 million from himself and Matrix Partners. The team includes a variety of executives from companies such as Google, YouTube, Yahoo and Apple. This is now Rossmann’s sixth startup. Three of the others went public and two were acquired. Rossmann is known as the father of the wireless access protocol (WAP) that enabled the first mobile phones to access the internet. His past companies include PSS Systems, Vudu, Zonbu, Openwave, Unwired Planet, and EO. He was once head evangelist at Apple and he has 37 patents.

The Klip app works with iOS devices running iOS 4.0 or later. It is not yet available for the iPad.

“We think there is an opportunity for a whole lot of growth here,” Rossmann said. “And we are laser-focused on providing an engaging user experience.”

The company has 20 employees. Rivals include Flipboard, Apple, YouTube and others.