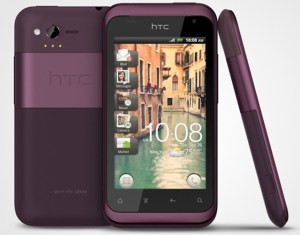 Every couple years, we womenfolk get a pink or purple gadget made especially for us; this time around, it’s HTC’s new Rhyme.

Announced today by HTC execs, the phone will retail for $199 with a Verizon contract and sport a 3.7-inch screen, a 1GHz processor, and a 5-megapixel rear camera.

In other words, it would be a perfectly standard Android handset, except for the fact that it’s purple, features a stable of feminine wallpaper options, and comes with a light-up charm.

According to recent research, between 73 and 63 percent of Android owners are men. In one survey, men showed a preference for Android devices while women in the same study showed a strong preference for the iPhone — something that we attribute entirely to marketing. So Verizon and HTC apparently thought a female-targeted phone and marketing campaign would help bring new consumers into the Android fold.

The Rhyme will not support Verizon’s 4G LTE service, but it will come in a bundle with the aforementioned charm (also purple, it is designed to clip to your purse and comes with an LED that flashes when you have a notification), a speaker dock and matching purple earbuds.

While we do understand that Android device manufacturers want to tap into the female demographic to extend their reach, we’re not sure a purple, light-up phone with mid-range specs and girlie wallpaper is the right way to do that. In fact, it might take an even greater commitment: several years of gender-neutral marketing that emphasizes features everyone can use and enjoy rather than Verizon’s current Android marketing, much of which positions the device at the center of a dystopian machine shop.

The HTC Rhyme will be available for pre-order starting September 22.