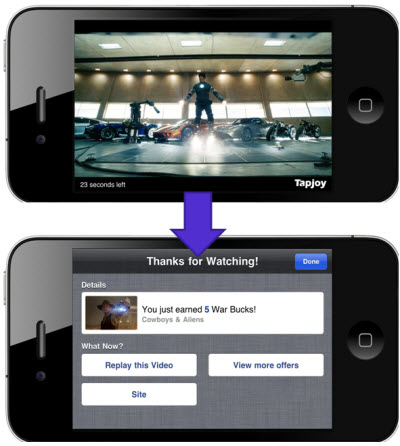 The move will help Tapjoy cash in better on mobile video ads, which are expected to grow to more than $20 billion by 2015, according to market researcher Gartner.

The program will allow advertisers to buy pay-per-view video ads within Tapjoy’s mobile app universe. That is, the ads will run in the games and other apps that have integrated Tapjoy’s monetization platform via its software development kit. Tapjoy will provide a native video player on the iPhone and Android smartphones that will play videos all the way through completion and do so without any annoying delays.

“We can deliver a much better result for the advertisers and the users,” said Linda Tong, Tapjoy’s vice president of products, in an interview.

Users can view the video ads to fulfill special offers, or ad deals where a user watches a video in order to earn a reward such as a virtual good inside a free-to-play mobile game. Rather than pay real money for the virtual goods, the user can do something of value to the advertiser, such as watching a movie trailer.

Tapjoy, Flurry, and AdColony offer such video offers already. With the Tapjoy Videos native player, Tapjoy will be able to cache videos, so that the videos will start playing immediately. Tapjoy will also be able to monitor whether a user has completed watching a video or not, and the advertiser will pay only if the viewing is completed. UPDATE: AdColony also says it has a native player that starts videos instantly.

Consumers can benefit because they can get their virtual goods in a game and also get to watch something that they choose to see, said Tong.

Tong said that the Tapjoy mobile platform can help advertisers reach more than 50 million people, giving them the same reach as some TV advertising. But the engagement with the audience is much higher and much more targeted, compared to TV ads. That’s why TV ad revenue is expected to be flat while mobile ads will grow 25 percent to 36 percent annually over the next three years, according to market researcher eMarketer. But eMarketer notes that only 38 percent of online video ads are currently viewed to their completion.

San Francisco-based Tapjoy calls this a “mobile value exchange” because both the advertiser and consumer get something that they want. And the native app player does not steer the user away from the experience of the original app, keeping the developer happy. Users can engage further with the brand by sharing videos on Twitter or Facebook.

Tapjoy has had a string of announcements lately. Most recently, it hired former PlayStation marketer Peter Dille as its chief marketing officer.