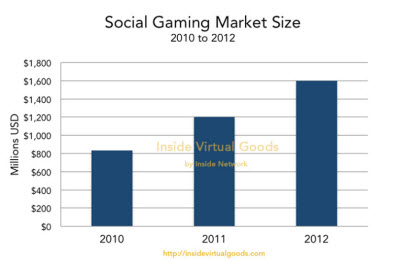 U.S. virtual goods revenue on Facebook is expected to grow 32 percent in 2012 to $1.65 billion, according to a new report by Inside Network.

That growth rate is lower than the 40 percent growth for 2011, as the market analyst firm predicts that revenue this year is growing from $800 million in to 2010 to $1.25 billion by the end of 2011. While that is rapid growth, it shows that the fast-growing virtual goods and social gaming industries that use it are maturing and slowing down.

Justin Smith, founder of Inside Network, said in an interview that the numbers reflect a slowdown in the torrid growth for virtual goods, which next to ads are a major source of business on social networks such as Facebook. On Facebook, most apps are free-to-play, where users play for free and pay real money for virtual goods such as custom decorations.

The report is jointly authored by Smith and Charles Hudson, an active social gaming executive and CEO of Bionic Panda Games.

Virtual goods generate revenue for the social game makers, who then have to pay Facebook a 30 percent cut for the use of its Facebook Credits virtual currency. The growth rate for virtual goods slowed a year ago after Facebook cut back on viral game distribution tactics — such as flooding someone’s news feed wit game invites — in the name of reducing spam on its network. Facebook has taken steps to restore viral growth, but game developers have become accustomed to life with slower growth rates.

But, Smith said, “We think an important part of this growth is continued better monetization of current users by developers. They can now systematically merchandise virtual goods and increase the lifetime value of users,” or the amount of money generated by a users over the life of an app or game. App makers are also better at making more money by cross-promoting one game to a user who is a fan of a related game.

The picture is not entirely bright for developers, since Facebook takes a 30 percent cut from a market that is growing at a rate of 30 percent next year.

“Not all of the growth is going into developers’ pockets,” Smith said. “The hope is that as Facebook Credits matures, it will help grow the market.”

Hudson said that based on the research, Facebook could make $500 million from Facebook Credits in 2012. In 2012, mobile social games will likely generate a considerable amount of money.

Next year’s estimate includes revenue from the Google+ social network, but Inside Network hasn’t broken that figure out yet. He noted that on a worldwide basis, Asia is still a much larger market for virtual goods than the U.S. While Zynga generates a considerable amount of the revenue from virtual goods on Facebook, Smith noted that the social game market is more competitive now with good growth for companies such as Electronic Arts, whose Sims Social game is a big hit.

While social games are growing, they aren’t taking over yet. Revenue from console games is still about 10 times bigger than social game revenue.