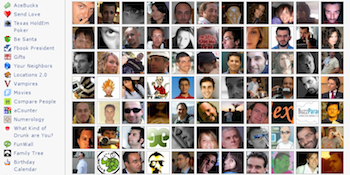 EDITOR’S NOTE: Welcome to VentureBeat’s new newsletters. Each week, I’m writing a column on business and technology, while Dean Takahashi is writing a column on videogames called The DeanBeat. They will be available to newsletter subscribers a whole day before they appear here on the website.

VentureBeat will have much more coverage of Facebook F8 2011 starting early Thursday morning, so stay tuned.

With 750 million people using it, Facebook has become one of the most far-reaching computer platforms of all time.

The company will have a billion users soon, most likely within the next few months. Zuckerberg has been promising to hit that milestone for awhile, and I see no reason that he’ll miss. Sure, the social network may be inflating its numbers — and competition from Google+ could slow it down, somewhat. Given Facebook’s momentum, though, eventually Zuck will hit his mark. It’s just a question of when.

When he does, this will put Facebook in an extremely elite group that few other companies have matched.

Offhand, I can only think of two or three companies that have a billion active customers: Microsoft, Nokia, and maybe Samsung. Walmart probably has over a billion retail customers. You’ll no doubt think of some companies I’ve overlooked, so please email me with your additions.

But unlike most of these companies, Facebook has real names and contact info for every one of its customers.

That’s why Facebook’s upcoming f8 conference, happening this coming Thursday, Sept. 22 in San Francisco, is particularly relevant. The company has barely begun to turn its massive reach into revenues, as Paul Graham noted recently, but with its subscriber base on the cusp of a billion, it’s about to turn on the money spigot.

Keep in mind that the entire internet didn’t reach a billion people until 2005. Mobile broadband subscribers hit a billion customers in 2010. Meanwhile, there are over 5 billion cellphone users worldwide, with one billion smartphone users by 2016. (Those people aren’t all customers of a single company, of course.) It took Google until May, 2011 to reach one billion monthly unique visitors, but the number of registered users is probably far smaller. Windows hit a billion customers in mid-2008, if reports from the previous year were accurate.

Of course, one of the oldest canards in business is the Chinese market fallacy: If we can sell our product to just one percent of China’s one billion people, we’ll be rich! Of course, most of those business plans fail to account for the difficulty of actually reaching all those people, let alone transforming them into paying customers.

With Facebook, however, it’s different: Every one of those customers will be reachable, making them a truly addressable market.

What can you do with a billion customers? Commerce, music and media, for starters.

Many observers expect Facebook to launch a music platform this week at f8. It seems unlikely to me that the company will try to compete head-to-head with Spotify, Rdio, MOG and the like: The market is already crowded and working out licensing agreements with music companies is a tedious business. It would be easier for Facebook to form partnerships with existing streaming-music companies, letting them integrate with Facebook so that you can see what music your friends are listening to and subscribe to or purchase that music yourself. Indeed, Spotify already has Facebook integration that lets you invite your Facebook friends to the service and share your playlists with them.

Facebook could take a percentage, the music streaming companies would get access to a massive market, and Facebook’s customers would easily be able to share music from whatever services they’re already using.

In fact, that seems to be just what Facebook is planning. Spotify, Rdio, Rhapsody and other services have all begun adding Facebook-related metadata to their tracks.

A similar integration would work well for streaming-video services like Hulu or Netflix.

Add these things together and Facebook starts to look like a media-distribution and monetization platform the likes of which no one has ever seen before. Apple’s iTunes is probably the closest competitor, and the Cupertino company has made a juggernaut out of its cross-platform reach, with hundreds of millions of customers for apps, music and movies. Facebook, with the right moves, could pose a serious threat to Apple on this front.

But what about commerce? With such a big addressable market, Facebook looks like a natural platform for selling stuff to people. Some have already begun doing that. A company called Payvment enables merchants to set up Facebook-based stores by adding commerce features to their pages. Payvment chief executive Christian Taylor told me that his company helps provide storefronts for 120,000 merchants (half of which are active), and that this accounts for 80 percent of the shopping activity on Facebook now.

In other words, the overall market for Facebook commerce is still pretty small. What would help kick this into a higher gear? A Facebook-based payment solution. Right now you can use Facebook Credits to pay for virtual goods, but not real-world goods. If the company expanded that to allow real-world purchases with Facebook Credits, or provided a shopping card and payment-processing solution that any merchant could use, it could really kick “F-commerce” into high gear.

And with nearly a billion potential customers, that would make Facebook into a market lots of companies would want to be in.