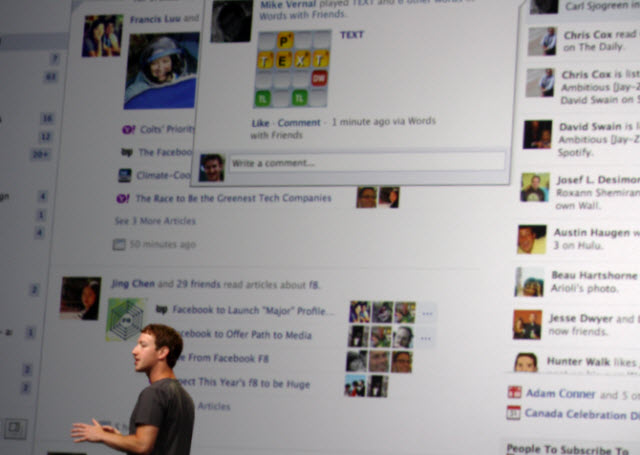 “Social games are killing it on Facebook,” Zuckerberg said, explaining that games are still the most popular apps on Facebook.

The updates to the Open Graph platform will enable new kinds of social game interaction. For instance, if two of your friends are playing the Zynga game Words With Friends on Facebook, you can see that happening in an activity ticker related to games on the right side of the screen. If you click on the ticker item about your friends, you get a small pop-up (pictured above) that shows exactly what word someone is playing. If you further click on the pop-up, you can see the entire game board and watch as it’s being played in real-time.

That’s the sort of thing that is possible with the update for Facebook’s Open Graph platform, Zuckerberg said during his keynote speech. Zuckerberg showed a long list of game publishers that are supporting the new Open Graph capabilities, from Zynga to Electronic Arts.

The cool thing about the new feature is that it will make it much easier to discover games in real-time on Facebook. Discovery is always one of the hardest things for game developers, who have to launch their new games into a sea filled with thousands of other competitors.