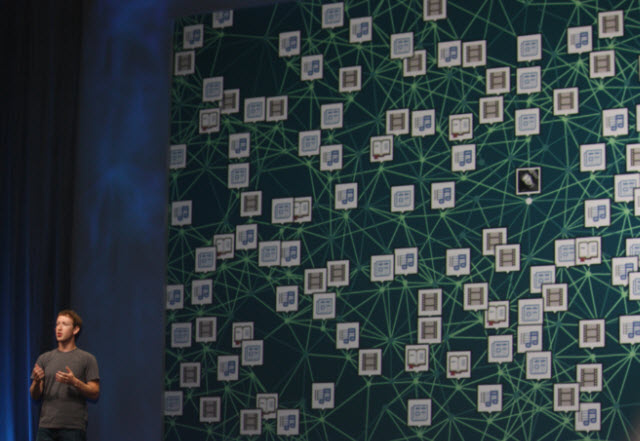 An update to the Facebook’s Open Graph platform will allow people to express themselves in new ways and will let developers create a new class of app, chief executive Mark Zuckerberg announced this morning. Friends can use these apps to do things like listen to a song at the same time and help each other discover new music.

“We are making it possible to build a new class of apps and rethink a number of industries at the same time,” Zuckerberg said in a talk before thousands of developers at Facebook’s f8 developer conference today in San Francisco..

Zuckerberg said people will be able to share all sorts of things that they couldn’t before, but without completely annoying their friends. You can publish your activities directly to your news stream, but your friends can also watch your activity on a ticker on the side of the screen.

These apps allow for a “frictionless experience,” real-time serendipity, and finding patterns in what you and your friends do. The platform changes are good for apps related to communications, games, media and lifestyle, he said. The company has redesigned its permissions process to allow users to post things related to material they have posted before, without having to grant express permission every time.

“Developers are using open graph not only to rethink music, but to rethink the music industry,” Zuckerberg said. “Being able to click on someone’s music and play it is a great experience, but knowing that you helped a friend discover something new…is awesome.”