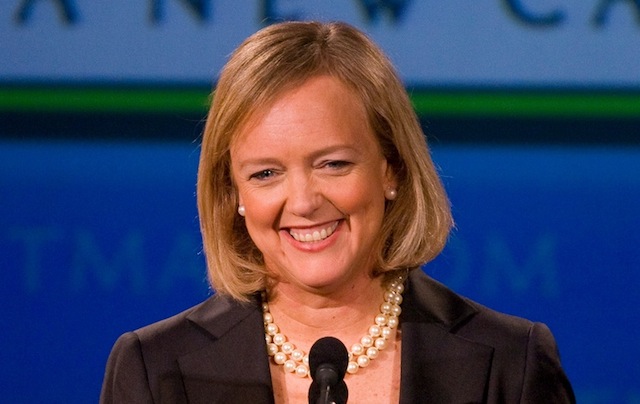 HP board chairman Ray Lane will take a more active role in managing the company alongside Whitman, becoming executive chairman (he was previously non-executive).

As co-leaders of the company, Lane and Whitman both pledged to stay the course set by Apotheker, but with a renewed focus on operational execution and maintaining shareholder value.

“HP really matters. It matters to Silicon Valley, to California, to the United states and frankly to the entire world,” Whitman said on the call today announcing her new role.

“Going forward, HP will have no higher priority than to meet the challenges of today’s macroeconomic environment and also to improve our operational performance.”

Whitman and Lane made no immediate changes to the plans announced by Apotheker in August. The company is still investigating the possibility of spinning off its personal systems group (PSG, the home of its industry-leading PC business), and Whitman said that she and the board will make a decision on that by the end of this calendar year.

Whitman also said that the $10.3 billion acquisition of Autonomy is moving forward as planned, and the company is still investigating the possibilities of using webOS somehow, while still discontinuing its webOS-based devices, the Touchpad, Pre and Veer.

“We will take the necessary actions to get HP back on track,” Whitman said. However, she warned shareholders and employees that results might not be visible immediately. “That’s not something that’s going to happen overnight. It’s going to take time,” she said.

“This board of directors cares deeply about Hewlett Packard. The decision to change the leadership of HP was one the board took very, very carefully,” said Lane. “It became increasingly clear that we needed new leadership to focus on operating our businesses.”

Questions have been raised about the competence and cohesiveness of HP’s board, which has fired two CEOs in the past year. Lane defended the current board, pointing out that many of the board’s members are new, and that this is not the same board that was involved in the pretexting scandal that cost former CEO Carly Fiorina her job, or Mark Hurd’s ouster less than a year ago.

“We’re embarrassed about the communications of these decisions. It could have been done better,” Lane acknowledged. But, he said, the board carefully considered its decisions announced on August 18, and stands by those decisions.

HP also revised its earnings guidance slightly, suggesting that fourth-quarter revenues would be somewhat lower than predicted in August.

See also: HP’s CEO revolving door will hurt it in the long run

PALO ALTO, Calif., Sept. 22, 2011 – HP today announced that its board of directors has appointed Meg Whitman as president and chief executive officer.

In addition, Ray Lane has moved from non-executive chairman to executive chairman of the board of directors, and the board intends to appoint a lead independent director promptly. These leadership appointments are effective immediately and follow the decision that Léo Apotheker step down as president and chief executive officer and resign as a director of the company.

“We are fortunate to have someone of Meg Whitman’s caliber and experience step up to lead HP,” said Lane. “We are at a critical moment and we need renewed leadership to successfully implement our strategy and take advantage of the market opportunities ahead. Meg is a technology visionary with a proven track record of execution. She is a strong communicator who is customer focused with deep leadership capabilities. Furthermore, as a member of HP’s board of directors for the past eight months, Meg has a solid understanding of our products and markets.”

Whitman said, “I am honored and excited to lead HP. I believe HP matters – it matters to Silicon Valley, California, the country and the world.”
Speaking on behalf of the board, Lane said, “We very much appreciate Léo’s efforts and his service to HP since his appointment last year. The board believes that the job of the HP CEO now requires additional attributes to successfully execute on the company’s strategy. Meg Whitman has the right operational and communication skills and leadership abilities to deliver improved execution and financial performance.”