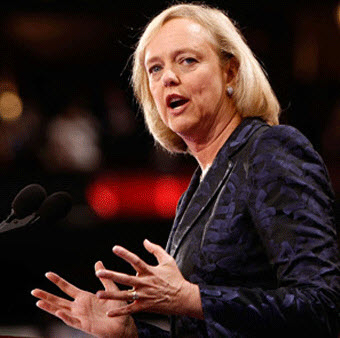 Hewlett-Packard has many advantages as the world’s biggest technology company. But having a consistent CEO is not one of them.

Today, the company announced that Meg Whitman will replace Léo Apotheker as CEO, giving the company its fourth CEO in a decade and its third in a year. That says a lot about a failure at the company’s board of directors, which has seen a considerable amount of turnover itself. Now the task at hand is not just about making sure that HP can stay on top as a tech giant. It’s about whether HP survives in the long term.

For the life of me, I don’t know why the HP board doesn’t choose an insider, like one of its major division chiefs, to run the company. With decades of inside knowledge, these executives are the ones who really make the company as profitable as it is. Sure, they haven’t been doing a great job lately, but they have institutional knowledge that outsiders such as Apotheker and Whitman just don’t have.

Getting rid of Apotheker was a no-brainer. In the past month, his approval rating among employees dropped dramatically to just 25 percent, according to jobs site Glassdoor. He spent more than 25 percent of HP’s market value on acquiring Autonomy, an enterprise infrastructure software company that might get the company a billion dollars a year in revenue, or less than 1 percent of its revenue. Apotheker gave up on HP’s WebOS devices (acquired less than two years ago at an expense of $1.2 billion) after just six weeks doing battle with Apple and other tablet makers. And he said HP would spin off its PC business or sell it — in maybe 18 months time. That decision will likely cost HP a lot of PC business, as customers aren’t likely to buy from a company whose fate is uncertain.

As the CEO of HP, Whitman now has to decide what to do with this mess. The board wholeheartedly approved HP’s move into software and its decision to get out of businesses where it wasn’t making enough money. HP’s resources aren’t unlimited, and it can’t fight everybody — Apple, IBM, Dell, Microsoft, Cisco and others — all at once. But Whitman is being tapped to lead because she is a good communicator and a strong customer advocate.

But Whitman has never run a company as big as HP. HP has seen more than $126 billion in revenue in the past year, which Bloomberg points out is 14 times the size of eBay’s revenues. She hasn’t run a hardware business, but now she is going to oversee one — and she is going to be the person who makes the call about whether HP should continue its long-term business relationship with Intel, particularly its alliance with Intel on the Itanium, a 64-bit chip that has been a joint project between HP and Intel since 1994.

Like previous CEOs, Whitman’s temptation will be to do whatever it takes to get short-term profits. For Apotheker, that meant terminating the WebOS device business, even though that product was strategic to HP as users make their transition from a PC-centric world to a mobile-centric world. HP really needed the WebOS technology to ensure it had a future in a post-PC world. Now what is Whitman going to do? Hire all the fired WebOS people back?

The problem is that Apotheker has just made some very big decisions and he has taken HP down a certain path. Investors hated these decisions, but the board was fully behind them. Whitman has said she will stay the course on these decisions, at least for now. On the other hand, if Whitman makes investors happy, she could wind up displeasing the board that employs her. It isn’t clear what Whitman can do going forward.

The sad thing is that the recent CEOs of HP seem to be obsessed with reorganizing the same set of assets. Carly Fiorina built up the PC and enterprise business by acquiring Compaq. Now Apotheker was planning to spin off the PC business, effectively undoing the Compaq deal. Mark Hurd bought Palm, and Apotheker dismantled it. That will be tremendously disruptive to HP’s work force, which has always been one of its strongest assets.

With every change in CEO, commentators like me bemoan the loss of the HP Way, the vision of the founders David Packard and William Hewlett, who believed in putting their people first. Every time, we suggest that HP hire an insider as CEO to keep the company on the straight and narrow path of the HP Way. But every time, the board goes with an outsider. Each time, the outsider decides to spin something off. At some point, there won’t be anything to spin off. And that will probably be the end of HP.