The next big thing for the consumer web could actually come from one of its oldest content verticals: lyrics. Services like RapGenius and TuneWiki are spearheading a new way of publishing and making money from song lyrics.

Lyrics are a massively underestimated market segment, says Tom Lehman, co-founder of RapGenius, one of the progenitors of this “lyrics 2.0” movement. “People don’t understand how popular lyrics are, and how much people like to read and understand them,” he says.

In fact, a staggering two percent of all Google search queries are for lyrics. The share of Bing’s pie is even larger, at seven percent. After ‘Facebook,’ the term ‘lyrics’ is the most common search term on Google in the US.

The existing lyrics services, spoiled by the high demand and dearth of disruptive thinking, have left the field wide open to those who see this shadow opportunity. Lehman referred to the shoddiness of existing lyric services as “so bad, it’s a meme.” Indeed, most of the incumbents, topped by MetroLyrics, AZlyrics and Sing365, hail from a bygone era of the web where banner ads, popups and poorly conceived user experiences were the norm. 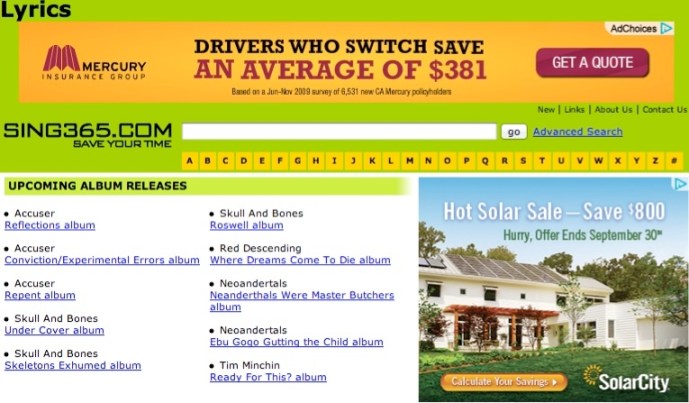 Lehman describes the system as fundamentally broken. “Rather than pummeling users with ringtone ads, which are scams anyway, why not take a longer-term approach?” he asks, referring to monetization strategies based on stirring peoples’ passions about artists and their music.

Yet these existing players still manage to command incredibly high traffic. The world’s highest-trafficked lyrics site, MetroLyrics, sees over 31 million monthly unique visitors according to Quantcast and Alexa estimates. Such traffic, despite their relatively unchanged and low quality experiences, shows that anyone who’s able to deliver value from innovative uses of lyrics has a chance to reap big rewards. 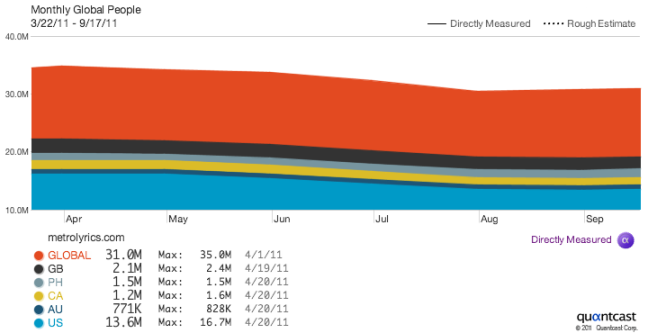 At the core of the new offerings is a basic re-imagining of how people interact with lyrics. According to Lehman, existing sites tend to view lyric queries as a “superficial reference” type of activity where users merely try to confirm what they hear (is that really a bathroom on the right?). In his experience, that view is overshadowed by a deeper desire to connect, engage and even obsess about lyrics through analysis and discussion.

RapGenius’s product caters to that new context, seeking to build knowledge and community through user-populated, highly detailed in-line explanations of lyrics, especially rap and hip-hop lyrics, which often have insider references and other deep meanings that are seldom understood on the first listen.

So far, more than 30,000 users have signed up to discover, interpret, explain, and debate lyrics with one another. More than 10,000 songs are fully explained by the community, some songs being viewed tens of thousands of times with contrasting interpretations and viewpoints on key lines. The site expects to reach over 5 million monthly unique visitors soon.

The site design is minimal and modern, a clear departure from existing services, which took aesthetic cues from the big sites of their heyday, making RapGenius more Tumblr than Altavista. The well-conceived layout with its intuitive highlights and bubble overlays is perfect for the infusion of explanations, analyses, context and criticisms to song lyrics. The same approach is envisioned for their upcoming mobile experience, which already sees 17 percent of site traffic (redirecting to the desktop version at the moment).

James Hritz, vice-president of monetization at TuneWiki, another social music company that’s placing big bets on lyrics 2.0, corroborates the trend. “Lyrics are about self-expression, community and learning,” he says, pointing to RapGenius as a service that “gets” this need. His own firm is radically re-envisioning its lyrics offerings to provide deeper, more meaningful experiences to music consumers in the vein of RapGenius.

TuneWiki has already learned a lot about how powerful lyrics can be. With a user base that’s 60 percent international, many flock to the service to use lyrics as a tool to learn English. Since TuneWiki’s software can directly translate its database of more than 4 million fully licensed lyrics to any of 45 different languages, people can hear their favorite tracks in English and read the lyrics in their native tongue. The site’s Lyric Legend iPhone Game that debuted last year was an early demonstration of how lyrics have disruptive powers companies like MetroLyrics simply haven’t executed on. 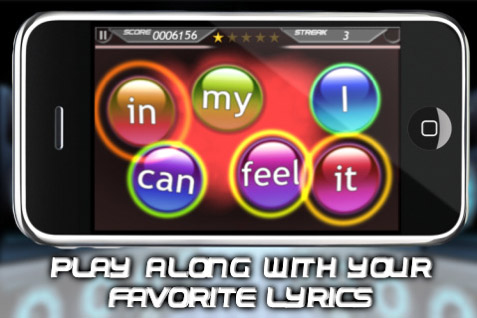