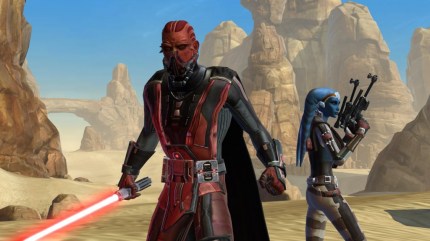 Game publisher Electronic Arts today announced that Star Wars: The Old Republic, one of the company’s most anticipated online games, will come out in December this year.

BioWare, the team behind the original Knights of the Old Republic and Mass Effect games, is developing The Old Republic. Electronic Arts is hoping that throwing that team, which knows how to make games with a great story and cinematic experience, will be enough to pull subscribers away from World of Warcraft — which has dominated the online gaming space for nearly 7 years.

World of Warcraft has more than 11 million subscribers and has dominated the subscription-based online gaming industry since it came out in 2004. The game is a massive source of revenue for Blizzard Entertainment, which charges gamers around $15 each month to access the game’s persistent world. Electronic Arts will use a similar subscription model, charging around $15 per month.