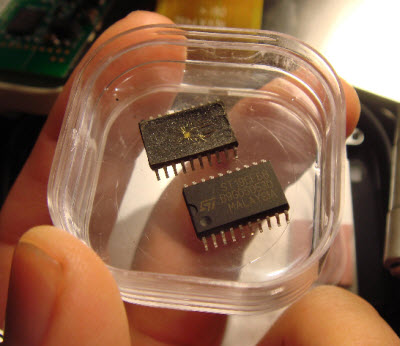 The motivation behind fakes — and the costs

Thieves go after chips because there is money in it. Chip sales last year were $298 billion, and such chips are the foundation of the $1.1 trillion electronics industry. The losses from counterfeiting are hard to calculate. But On Semiconductor testified that a computer maker that unknowingly solders a 10 cent counterfeit chip onto a printed circuit board may have a $100 loss if the board fails. Or, if the computer makes its way into the market, a consumer may find that a $500 computer fails sooner than expected. Five customers complained about bad chips and received $1.2 million in refunds, but that barely made a dent in VisionTech’s revenues. [picture source, right, Bunnie Studios]

To bring a point home in the sentencing hearing, the government plans to show a video from Texas Instruments showing the extreme precision and cleanliness required to make a chip in a clean room factory. For comparison, it will show another video showing Chinese peasants heating chips on a Hibachi grill to melt solder and loosen computer chips in circuit boards. Those chips are then knocked off the boards, sorted with brooms, washed in a river, dried on riverbanks, dried and remarked, and sold through malls in China in new devices.

Prosecutors found one email to Wren and McCloskey that had the subject line “Shenzhen hard at work.” The image shows a sweat shop with 12 Chinese workers, a number seated next to each other facing a wall. One worker is holding a solder gun and is at a station with a solder gun.

While VisionTech had a professional-looking web site with an image of a fighter jet, there were clues to the fraud. The firm had been around since 2002, but it claimed a “combined 35 years of experience” in the industry. It also said it was IOS-compliant, rather than “certified” by the International Organization for Standards. Employees were told to say the chips came from Germany, when in fact they came from China most of the time. VisionTech tried to hide that fact by having the goods shipped from Hong Kong, rather than from mainland China.

VisionTech often sent “bait and switch” samples when customers asked for chips that they could test. A small number of good chips were sent as samples, but the volume orders were fulfilled with fake chips. They also polished the chips with Armor All, to make them appear clean and shiny. Wren’s own son was photographed sitting at a work table with a chip, a toothbrush, an eraser, and a bottle of Armor All. The boy appeared to be “refurbishing” the fake chips. Employees also created false “certificates of conformance” for the chips on VisionTech letterhead.

The VisionTech staff was trained in “social engineering,” or using con-artist tactics to fool people who might discover the counterfeiting. When customers confronted VisionTech about the fake chips, Wren and McCloskey argued with them, saying that the components were bought too long ago for VisionTech to do anything about it. Returned chips were simply returned to stock for shipment to another customer. 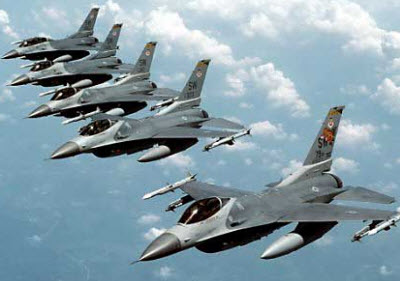 The counterfeiters seemed far too brazen in retrospect. Wren admitted to one supply chain investigator, ERAI, that he lied about China being the origin for the parts. The investigator, Krystal Snider, told him, “Shannon, that’s fraud.” When confronted with accusations, the company fought back belligerently, only occasionally giving up and offering refunds.

These tactics helped hide the fraud for a longer period of time than usual. But eventually, the weight of complaints brought attention to VisionTech, and the feds launched their investigation. Customers such as Suzy Henderson at BAE Systems began complaining to authorities. From 2004 to 2010, investigative firm ERAI received 21 formal complaints and 53 negative references for VisionTech.

The scheme all unraveled after federal agents made an undercover purchase on June 17, 2009, and another one on July 15, 2009. Federal agents bought Texas Instruments, Analog Devices and National Semiconductor devices from VisionTech. The companies studied the parts and figured out they were all fakes, partly because they had fake part numbers and date codes.

The fed raided the business on Sept. 14, 2010. In a plea bargain, McCloskey admitted that she supervised day-to-day operations at VisionTech and could hire or fire employees. She didn’t finish high school, but had her GED. She is a divorced single mother with a 12-year-old son. She had limited training in chip technology, and admitted to “willful blindness” to the fraud taking place. When confronted by customers, her behavior was “nasty and rude,” according to the sentencing document.

She eventually cooperated, providing investigators with a password to the VisionTech computer system. The government is asking that McCloskey pay restitution for the cost of parts. And the government is recommending 54 months of jail time for McCloskey.