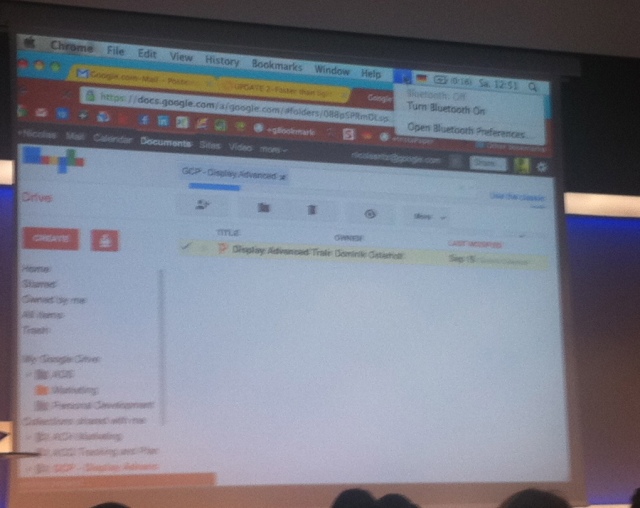 Google appears to be close to rebranding its online document service, Google Docs, as a virtual hard drive in the cloud.

A blurry screenshot (shown above) snapped by blogger and social media consultant Johannes Wigand appears to show a slightly modified version of Google Docs, called Drive. The screen appeared for a few seconds in “an event powered by Google,” Wigand reports.

The screenshot looks almost identical to the “new look” for Google Docs that’s currently available as an option in some Google accounts, except that the word “Docs” in the upper left has been changed to “Drive.” The folder menu is labeled differently as well: It’s called “My Google Drive” instead of “My Collections.”

TechCrunch’s MG Siegler elaborates on the screenshot, adding other clues that Google Drive is coming, such as a Google Docs dialog that mentions “Google Drive” and some code that recently appeared in the source code for Google’s open-source browser Chromium.

TechCrunch also adds a detail not apparent from the screenshot: That Google Drive will be a full-fledged competitor to other online storage services like Dropbox and Box.net, with the ability to sync with local files. There’s no source for this last assertion, however.

Google Docs already acts as a virtual hard drive in many ways, with the ability to store and share images, videos and PDF files in addition to document formats that are editable in Google, such as spreadsheets, presentations and word-processing documents. Google offers 1GB of storage for free, with the option to purchase 20GB for $5 per year. It supports uploading and downloading of entire folders, although without automatic syncing. Turning Docs into Drive would be a small change, but the name change might significantly change the way people think about and use the service.