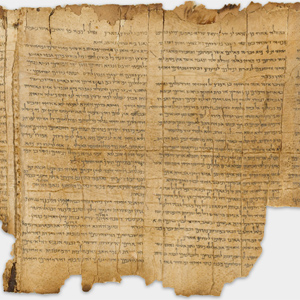 The famous 2,000-year-old Dead Sea Scrolls are now available for viewing online in high-resolution, thanks to Google and the Israel Museum in Jerusalem.

The Dead Sea Scrolls were discovered between 1947 and 1956 inside caves along the shore of the Dead Sea and contain the oldest known copies of many texts from the Bible. They also include secular writings that help shine a light on what life was like for people living in the first and second centuries.

For years, the most complete scrolls have been stored in vaults in Jerusalem, but now anyone with a computer will be able to read and examine the documents. Images of the scrolls were captured using 1,200 megapixel cameras that allow for incredible detail and close examination.

“The Dead Sea Scrolls Project with the Israel Museum enriches and preserves an important part of world heritage by making it accessible to all on the internet,” said Yossi Matias, Managing Director of Google’s R&D Center in Israel, in a statement. “Having been involved in similar projects in the past, including the Google Art Project, Yad Vashem Holocaust Collection, and the Prado Museum in Madrid, we have seen how people around the world can enhance their knowledge and understanding of key historical events by accessing documents and collections online.”

The entirety of the Dead Sea Scrolls are slated to be online by 2016. The Israel Antiquities Authority, which owns thousands of scroll fragments, has also started a project to put their texts online with help from Google by that date.

The following scrolls, as described by the Israel Museum, are now available for viewing:

• The Great Isaiah Scroll, inscribed with the Book of Isaiah and dating from ca. 125 BCE, is the only complete ancient copy of any biblical book in existence.
• The War Scroll dates to the late first century BCE or early first century CE and describes a confrontation between the “Sons of Light” and the “Sons of Darkness”, which would last forty-nine years, ending with the victory of the “Sons of Light” and the restoration of Temple practice according to their beliefs.
• The Temple Scroll, from the early first century CE, claims to provide the details of God’s instructions for the construction and operation of the Temple in Jerusalem. Written on animal skin only one-tenth of a millimeter thick, the Temple Scroll is the thinnest parchment scroll ever found among the Dead Sea Scrolls.
• The Community Rule sheds light on the Community’s way of life, dealing with subjects such as the admission of new members, conduct at communal meals, prayer, cleansing rituals, and theological doctrines.
• The Commentary on Habakkuk interprets the first two chapters of the biblical book of the prophet Habakkuk in a unique style that makes it a key source of knowledge of the spiritual life of the secluded Qumran community, shedding light on the community’s perception of itself.