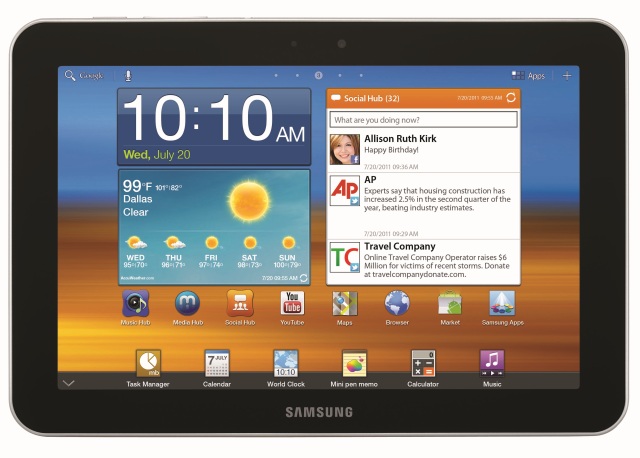 Samsung on Monday introduced its Galaxy Tab 8.9 tablet, a smaller sibling to the sleek Tab 10.1, which is currently of the best Android tablets on the market. It also showed off two updated Galaxy Player media devices.

The three new devices are not huge releases for Samsung, but they will help the company compete heavily with Apple’s popular iPad 2 and iPod touch devices this holiday season. The company first introduced the tablet to the world back in late August, but used this event at the Samsung Experience in New York City to officially show off the 8.9 (pictured above) and introduce two new products to the U.S. market — this is the first glace we’ve had of the new Galaxy Players.

Spec-wise, the Galaxy Tab 8.9 features an 8.9-inch WXGA TFT display, 1.5-GHz dual-core T250S processor and Samsung’s TouchWiz user interface running on top of Android Honeycomb. The 16GB model will retail at $469 and the 32GB version will cost $569, with nationwide availability on Oct. 2.

Samsung also used the opportunity to show off new editions of its Galaxy Player media device, which is an Android-powered alternative to the iPod touch. The device comes in two versions, one with a 4-inch screen and one with a 5-inch screen.

The Galaxy Player hardware runs Android 2.3.5 and has front-facing and rear-facing cameras, 8GB on-board memory, a microSD slot compatible with up to 32GB cards, and Bluetooth and Wi-Fi connectivity. The 4.0 model will cost $229, while the 5.0 model will have a $269 price tag. Both devices will be available in the U.S. Oct. 16 at major retailers.

If we had to guess, we’d say these new devices are going to get dragged into the worldwide patent lawsuit battles brewing between Apple and Samsung.

More pictures of the Galaxy Tab 8.9 and Galaxy Player can be viewed below: