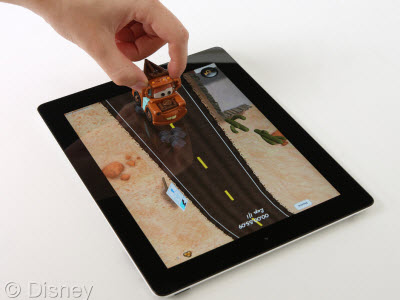 Disney is throwing the combined firepower of its Cars entertainment brand, its retail toy business, and its mobile app capability into a new line of Appmates mobile application toys being announced today.

The entertainment giant will sell Appmates toys based on Cars 2 movie characters, and those toys can be used to control a virtual racing world on an Apple iPad. It is one more example of a gaming app that is a hybrid of the physical and digital worlds.

In creating the product, Disney is getting ready for the day when kids come home from school and play with their tablets and smartphones, rather than turn on the TV, Bart Decrem, head of Disney Mobile, told VentureBeat.

He said that the toy is the first to transform the Apple iPad into a virtual play mat for kids. And the app turns ordinary toys into a part of an immersive game world for kids, full of sounds, narration, and music. That transforms a static and boring toy into an interactive experience.

“We are bringing Disney characters to life,” Decrem said. “Our vision was to take the Disney presence and apply it to the AppStore in a way that creates magical moments.”

The physical part is a toy, like the Mater character pictured at right. You place the toy on top of the iPad and press down. The iPad recognizes that Mater is on top of it and then you can push down to move around on the virtual environment of the iPad app. You can then race other virtual cars and smash into virtual objects by turning the toy in different directions as it sits on top of the touchscreen of an iPad. It creates a kind of 3D illusion.

“The iPad is a new canvas for creativity, and Disney wants to be on that platform,” Decrem said.

The products and apps will come out on Oct. 1. The app is a free iTunes download for the iPad and iPad 2, but Disney will charge $20 for sets of two cars. The toys will be available in Disney Stores and on DisneyStore.com. The whole idea is similar to Activision Blizzard’s Skylanders, which combines toys with console video games as well as mobile devices. 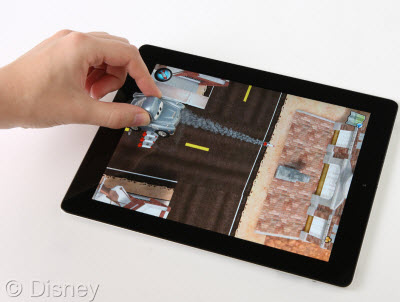 As you can see in the video below, you can race other cars. If you run into them, you can knock the other cars out of the race. There are five different race tracks available in the map of Radiator Springs (the setting in the Cars movies) in the first app. You can play as six different character cars from the film. Kids can explore the world, perform missions, and compete in races. The characters include Lightning McQueen, Tow Mater, Finn McMissile, and Holley Shiftwell. Two additional characters – Francesco Bernoulli and Shu Todoroki – will launch in November.

The bottom of each car has a unique touch footprint that the touchscreen can recognize, so the app can tell which car is sitting on top of it. If the Mater toy is sitting on top, the app will narrate the experience with Mater’s voice. No cable or wireless connection is necessary when you use the toy to make something happen in the game.

Decrem said the concept was around for a year and the company began working on its seriously after Disney bought the mobile gaming firm Tapulous (Decrem’s company) a year ago. Disney Consumer Products, Pixar, Spin Master, and Disney Mobile collaborated on the toy line.

If the toys are successful, then you can expect more toys based on other Disney properties in the future. Decrem said the company is already planning to add more Cars 2 content.

Kids can explore the full virtual game world of Radiator Springs, discovering landscapes and secrets by moving in any direction. They can drive through mud and up ramps, visit friends at Flo’s V8 cafe, and check out the car’s reflection in a mirror. If they crash into a radio tower, it will change the station to another song. And, as in the Cars movie, Mater can sneak up on cow-tractors and blow a horn, making the tractors fall over.

You can perform missions such as towing cars with a tow hook, and then collect hubcaps, the virtual currency of the game. You can use that currency to buy virtual gadgets such as missiles or machine guns. Right now, everything you purchase inside the game is free. You don’t have to shell out extra cash in addition to buying the toys. 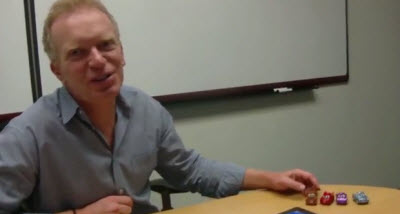 You can trick out a car with a unique horn, custom tires or green exhaust. Each toy unlocks different features and content within the app. The play is both structured and unstructured, Decrem said. The game comes with a five-minute tutorial.

“The great thing is when you see a child take the toy and play with it on their own and then use it to play on the iPad,” Decrem said.

Disney has dozens of apps available on the iPad today. It is also launching other merchandise that can be used with iPads, including a Disney Pixar Cars protective case, a Disney Pix Camera, and Disney Spotlight microphone.

Decrem (pictured right) also noted that Disney’s latest app, Where’s My Water, has hit No. 1 on the paid apps charts for the AppStore. In that app, you have to use your finger to dig tunnels through the ground to bring water to Swampy, a cute alligator that wants to take a shower. After three days, the app hit No. 1 and it has a rating of five stars out of five after 2,000 user reviews on the AppStore.

“We’re taking the Disney brand into the AppStore, and if it goes well, we’ll do more of it,” Decrem said.