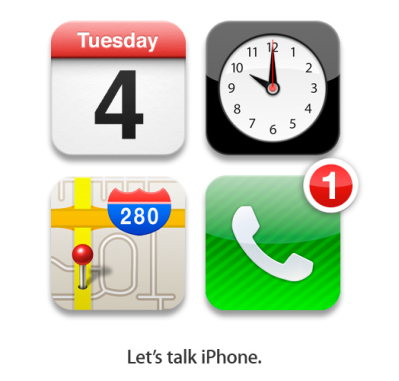 Confirming recent rumors, Apple has sent out press invites for its iPhone 5 event on October 4 at its Cupertino campus.

Surprisingly, Apple is pretty straightforward in the invite regarding what the event is about: “Let’s talk iPhone.” Typically, Apple tends to be more coy about its events, even when it’s plainly obvious what they will be about.

The invite confirms that new Apple CEO Tim Cook will be leading the event, which will begin at 10am PDT. All Things Digital reported last week that Apple was gearing up for an October 4 iPhone 5 event and that Cook would be hosting.

At this point, the iPhone 5 is expected to include a larger screen of around four inches, a dual-core A5 chip, and as we reported yesterday, a powerful virtual assistant. As for other devices, Ars Technica notes that Apple may introduce a white iPod Touch. Previous rumors also pointed to Apple releasing a low-cost — and potentially free with contract — iPhone 4 that will be married to its iCloud service.

As I wrote last week, it’s clear why the iPhone 5 is a big deal, but the event will also mark the first major product announcement for new CEO Cook. While Cook’s business savvy has been proven time and again, he will have to prove with his iPhone 5 presentation that he can also fill Steve Jobs’ role as an Apple product evangelist.