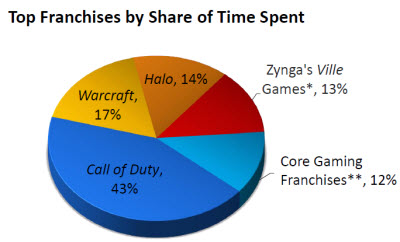 All eyes are on Zynga now as the social gaming company prepares to go public in an initial public offering. The social game maker has revealed some data about itself in filings with the Securities and Exchange Commission. But Raptr, the social network for gamers, has been mining its own data on 10 million users for information about Zynga, and it is releasing it in a report today.

The data reveals that Zynga’s user base of more than 265 million monthly active users are playing games almost as much as the top hardcore gaming franchises. The pie chart at left shows that Activision’s Call of Duty is the top franchise in share of time spent at 43 percent, followed by World of Warcraft at 17 percent and Microsoft’s Halo at 14 percent. But Zynga’s Ville games (FarmVille, PetVille, YoVille, FrontierVille and CityVille) games have 13 percent of time spent on games, followed by core gaming franchises at 12 percent. That means players are spending more time with Zynga’s Ville titles than they are with Assassin’s Creed, Gears of War, Mass Effect, and Grand Theft Auto. 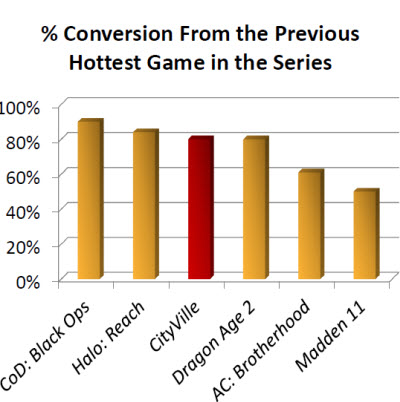 In social games, Zynga has more than 60 percent of the overall market. While hardcore franchises such as Call of Duty and World of Warcraft are played for longer durations, Zynga’s Ville games are played four times more frequently. Zynga also takes advantage of those frequent sessions by constantly serving up marketing messages to stir up engagement, cross-promote  its other games, and handle transactions.

Since the launch of YoVille in 2008, Zynga’s Ville games have almost doubled in average session time length. Average session length is usually around 5 minutes.

In getting users to move from one Ville game to another, Zynga is doing great. Even though Zynga’s user size per game is at least five times bigger than hardcore games, it is still able to grab an equal proportion of users from game to game (see graph at right).

In total online players since 2008, Zynga’s top titles racked up three times more hours than the rest of the top 10 combined. (This was measured before the resurgence of Electronic Arts with its Sims Social title). Zynga’s share of play time was 75 percent for the top 10 social games since 2008, compared to 10 percent for EA PopCap, 5 percent for Digital Chocolate’s Millionaire City, 5 percent for Kabam’s Kingdoms of Camelot, 3 percent for Wooga’s Monster World, and 2 percent for Kixeye’s Backyard Monsters.

As for crossover between hardcore gamers and Zynga fans, about 12 to 20 percent of Zynga’s CityVille players have also played hardcore games such as StarCraft 2, Lord of the Rings Online, and Call of Duty Black Ops. The percentage of Xbox 360 players who have played a Zynga game increased to 30 percent in 2011, up 50 percent from a year before.

The report was based on data collected from Raptr’s player base and it looked at data from Raptr’s launch until August 2011.