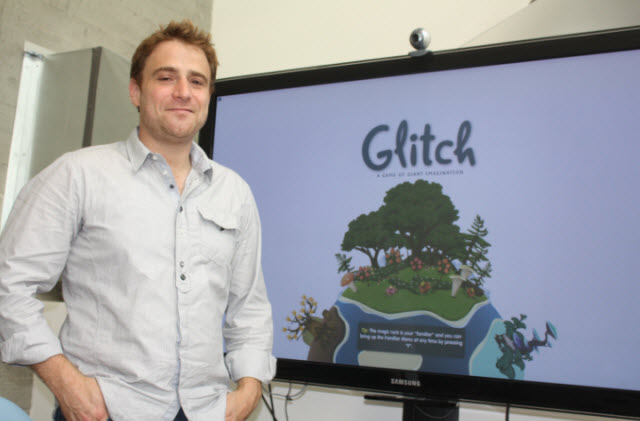 An unusual online game called  Glitch is launching today. From the moment you log in, you know you’re not in the real world anymore. You appear inside a brain, one of the minds of eleven giants who imagine the game’s zany landscape.

“It is super metaphorical,” the greeting for the tutorial says. “Your job is to grow and expand the world, shaping it while developing your own unique character.” 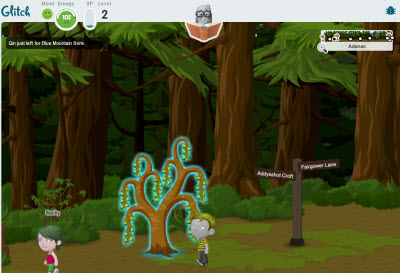 This journey into the imagination isn’t your normal game, so it’s no surprise it came from a startup that’s been working on it for a very long time. Glitch is the brainchild of Tiny Speck, a San Francisco company started by Stewart  Butterfield, who previously co-founded photo-sharing site Flickr. Video games are often slammed for their blockbuster mentality, not creativity. If Glitch takes off, it will show that there is still room in the perhaps overly commercialized game industry for artistically crafted and thought-provoking independent games.

“This world is built with hand-drawn animation,” Butterfield said. “It is a persistent world, with its own ecology and economy. It’s totally uncharted.”

From the very start, Glitch is different. You can water plants, but you can also pet them to make them grow. If you nibble a pig’s ear, it will give you some meat. You can find little “music blocks,” which play snippets of music when you click on them. If you find a butterfly, you can give it a massage. If you squeeze a chicken, you can get a piece of grain. 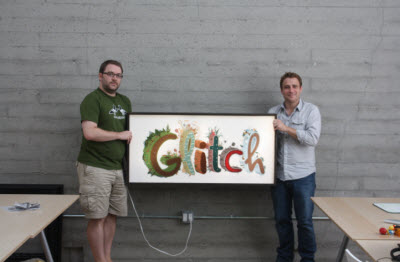 You have to do things that keep your energy and your mood high. In order to do that, you have to collect and eat things. Everything has to stay in balance. These complex systems, such as the world’s trees, have to be cared for in order to keep the world in order. Pigs have to be fed or they eat leaves off the trees. If the leaves are eaten, the trees die.

Glitch is a web-based massively multiplayer online game. About 27,000 players have already tested the game. It is non-violent, highly social and is played as a two-dimensional cartoon animated world. Butterfield says the designers of the game and the players create the Glitch universe in tandem, with the designers constantly tweaking and improving the platform while the players cultivate a sophisticated and irreverent civilization.

Players can do just about anything, from curating an art installation to hosting a diamond-infused dinner party. Tiny Speck provides the raw materials and a stimulating environment. “The vision is to bring a new level of creativity, beauty and social engagement,” Butterfield (pictured at top) says. 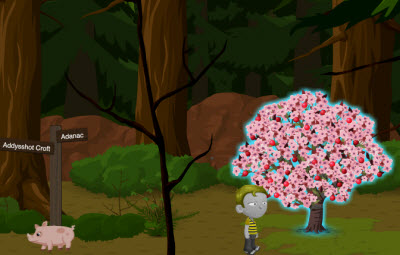 Part of the mission is to bring art to a wider audience. The game mixes all sorts of original visual styles. The look varies as you travel up and down the boulevards of the world. It changes from psychedelic to surreal, from Japanese cutesy animation to hyper-saturated pixel art, classic cartoon to contemporary mixed media.

Players can adjust their avatars, or game characters, in many different ways. They can buy outfits and customize as they wish. They can go on missions. In one, they have to get some official papers from a government agency. They have to interact with bureaucrats, who keep saying they have to check with someone to get a proper answer. At some point, the bureaucrat finally delivers the papers.

The game invites players to come back a lot by getting them to learn skills. There are about four months’ worth of skills in the game now. The game also has hundreds of different objects.

You can also come back just to explore the surreal universe. If you want eggs, you can get them from an eggplant. Then you take them to a chicken to incubate them. Dairy products in the game come from butterfly milk. And pigs are born from the eggs.

“Everything is super whacky,” Butterfield said. “If you play it for a while, it makes sense. It’s a surreal wrapper around the world.”

On the social side, players can go on quests together or play multiplayer sports mini games. They can form conga lines and dance. The world is unified, so friends can interact with anybody in the world. The game is built in Adobe Flash, so it isn’t that demanding, technically. But Tiny Speck tried to push the limit on how many objects can be on the screen at one time. The game has cool lighting effects and faux 3D animations.

Some of the sections of the world reflect the influence of some of the giants, but the world isn’t divided into territories. The basic story is that one giant became too powerful at one point and things “glitched apart,” Butterfield said. 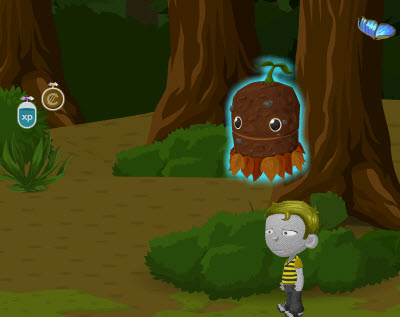 Butterfield and his wife Caterina Fake were thinking about making a game before they did Flickr. But Flickr took off like wildfire and they sold it to Yahoo in 2005. They then returned to work on the original game that they had started. Tiny Speck’s founders include Butterfield and three other original team members from Flickr: Cal Henderson (pictured above and below in green shirt), Eric Costello, and Serguei Mourachov. They started the firm in 2009 and it now has 40 employees. Tiny Speck raised $10.7 million in April from Andreessen Horowitz and Accel. Legendary game designer Ketia Takahashi (no relation to me), the creator of Katamari Damacy, joined the team in July as a Glitch game designer.

Takahashi is busy building zany missions for the game. Butterfield said that Tiny Speck will take advantage of web-based software to release new content on an hourly basis. He showed me how quickly he could create an object, give it characteristics, and set it loose in the world. Half the development time, he said, was creating tools to quickly create game elements.

Players can stay in touch with the game while on the run. The full Glitch site is accessible from a mobile app, Glitch HQ, for the Apple iOS platform. The mobile app lets players keep up with updates and chatter from their game friends. Third-party game developers are busy creating web and mobile extensions of the game using Tiny Speck’s applications programming interface.

“Those developers can create something and have it be in the world in an hour or so,” Butterfield said.

The game is free to play, with virtual item sales. But you can subscribe to the game if you wish to get wider access to cool things. You can’t purchase anything in the game that gives you an advantage over other players. If you buy anything, it’s mostly for the sake of decoration or vanity.

VentureBeat’s readers can get a “fast pass” access to the world of Glitch by clicking on this link. The company may not be able to add everybody all at once at the very start. 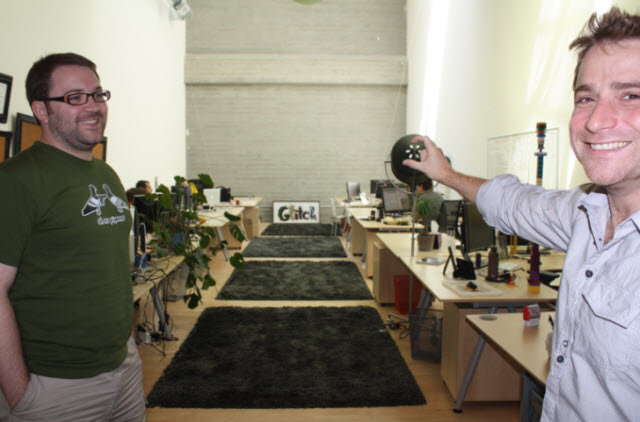