This just might be the first social gifting service that doesn’t suck. In fact, it’s downright cool. Wrapp is turning Facebook into a frictionless gift giving environment. The company and concept will be put to the test as it prepares to launch in the United States.

The service, which is only up and running in Sweden at the moment, partners with retailers to offer free gift cards to users with the goal of getting those users to add a bit more to the free amount.

Clothing retailer WESC, for example, offers a 100 krona (about $15 U.S.) card through the service. It’s really $15 for free. But WESC and Wrapp are taking a gamble that gift senders will up the ante. If people just give free certificates, that’s okay too. Participating retailers report that free certificate bearers end up either spending more themselves or becoming repeat customers, according to Wrapp cofounder Hjalmar Winbladh.

Here’s how Wrapp works : I receive a reminder from Wrapp that my friend Bill’s birthday is coming up on October 7th. That’s based on the information on his Facebook profile. I can then choose a digital gift card for Bill. I select a Bjorn Borg underwear card as the perfect gift. Other retailers partnering with Wrapp include sporting goods retailer Stadium, home improvement chain Clas Ohlson, WESC and the charity SOS Childrens’ Villages.

The gift I choose for Bill gets “wrapped” so he cannot see the certificate until his birthday. Other Facebook friends can see the wrapped gift on his wall and can add to the total amount. Winbladh calls this a “gift dialogue.” The certificate grows until Bill’s birthday arrives and the certificate is unwrapped. To redeem the digital gift cards, Bill clicks the link on his Facebook Wall (or, if sent by smartphone, a gift text message from me). When he gets to Bjorn Borg, he can press “Use” on his Wrapp mobile app and the gift card barcode is displayed. The cashier will either scan or visually confirm the gift card and the transaction is complete.

Wrapp is the brainchild of Andreas Ehn, founding CTO of free music service Spotify, and Winbladh, the founding CEO of  mobile VoIP company Rebtel. The only limitations with the Wrapp gift app are that you can only use it on Facebook or smartphones and only in Sweden.

Ehn and Winbladh have completed testing in Sweden and have started signing up businesses in the United Kingdom. They are just now dipping their toes in the U.S. market.

“We were intrigued by the concept that gift giving is much nicer than gift buying,” says Winbladh. Read that again. It will make sense in a minute. “This is not discounting or daily deals. This is turbo-charged gift giving.” 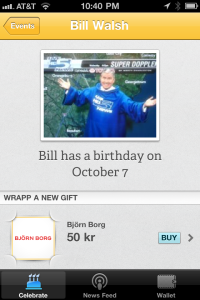 Retailers partnering with Wrapp get to tap into the advertising power of the social network. Friends giving and receiving WESC gifts will get more attention than an advertisement. Wrapp makes money, too. It takes a cut of the total redemption amount, but only after the gift card is used.

Gift cards are a $100 billion industry in the U.S. according to the National Retail Federation. Besides going from paper printouts to nifty credit card-like plastics, there hasn’t been much innovation in this industry. The tests in Sweden revealed people give gifts for events not limited to birthdays, holidays or other anniversaries. There are “cheer-up” gifts and “happy Friday” gifts.

“Coupons are not the things that will make this market interesting,” says Winbladh. “We need friend to friend, viral interactions. Then there has to be a reason for you [to send a] gift on a daily basis or at least a couple of times a week. Giving discounts to each other isn’t fun. We looked at the gift carding business and thought, ‘why not do it digital and connect it on a social grid?'”

Also on the Wrapp team are Carl Fritjofsson, strategy advisor to Groupon.se; Aage Reerslev, founder of mobile browser Squace; and Fabian Mansson, former CEO of H&M and Eddie Bauer. Winbladh co-founded mobile Internet company Sendit, where he served as CEO, and took it public in 1997, before being acquired by Microsoft. In 2006 Winbladh co-founded Rebtel.

As for the issue of the platform only serving Facebook and smartphones, Winbladh says he isn’t worried.

“We feel those trends are growing,” he says. “And if you look at a consumer that a retailer would like to have, it’s a consumer with a smartphone in their hand.”