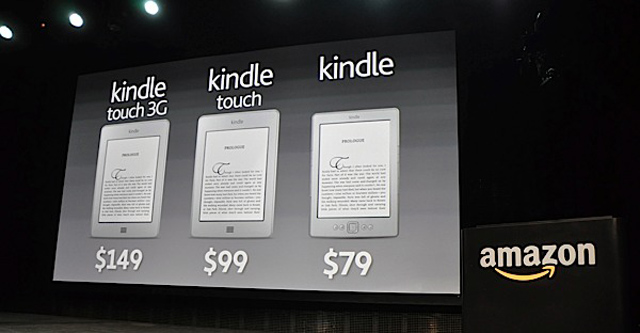 Along with showing off its hyped Kindle Fire tablet, Amazon today dropped the price of the original Wi-Fi-enabled Kindle e-reader to a jaw-dropping $79 and launched a new touch-enabled $99 Kindle Touch.

Along with its cheaper price point, the new $79 Kindle is slightly updated. The device still features an E-Ink screen and shaves off the keyboard, making it 30 percent lighter than the previous generation at 5.98 ounces but it will feature moderate advertising (“special offers”), while the model without offers runs $109.

The company also unveiled the new $99 Kindle Touch, an infrared-touch-enabled version of the Kindle that looks incredibly similar to the $79 Kindle. It features “EazyReach” tap zones that make it easier to switch pages on the touch screen with a single hand.

The ultra-cheap Kindle and Kindle Touch are available for order now from Amazon. The Kindle is available now, while Kindle Touch will ship on Nov. 21.

All of the new Kindle models will help Amazon battle Barnes & Noble in the e-reading tablet space, while the Kindle Fire could eat into the Apple’s iPad market share simply because of its $199 price point.