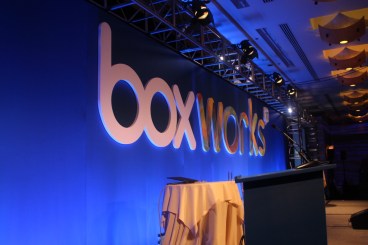 Turning down half a billion dollars

A traditional software company approached Levie earlier this year with quite an offer. At the time, the company was valued at around $550 million, venture capital data provider VC Experts analyst Justin Byers told VentureBeat. That’s a pretty attractive valuation and potential offer for any entrepreneur.

But Levie has said he has much higher aspirations and decided to turn down that offer. While ambitious, it always feels like he’s very candidly aware of the competition and at any time has a secondary and tertiary plan to outmaneuver them. You can see it if you talk to him about the business: he has a cool awareness and understanding when speaking, compared to his usually uncontrollable energetic demeanor.

“When you think about the size of the market, we are one percent of the way to the cloud,” Levie said. “Any interruption in that plan would  have been selling ourselves short.”

Normally an offer as large as the one Levie faced would get an investor’s attention. It’s their business to invest — preferably early — and bank on a big payout. But Box.net’s investors told VentureBeat that they were fine with letting Levie turn the offer down. Investors from Andreessen Horowitz, Draper Fisher Jurveston and Meritech Capital all independently confirmed the deal with VentureBeat and said they gave Levie free rein to make the call.

“Absolutely, we were okay with it,” Stein said. “We want Aaron to go as big as possible, it’s rare that you find an entrepreneur that has the energy to see a project through to the end.”

It’s a dangerous call to make. Some startups that have soared quickly to large valuations, such as Chatroulette, have ended as complete flops. If a company turns down a sweet offer, then fails, investors look bad and so does the entrepreneur. But Levie and his investors said they were confident that Box.net could continue to grow at a blistering pace.

“Literally any employee across any vertical — sales, IT, management, whatever — can find some kind of use for Box.net,” Forrester analyst Rob Koplowitz told VentureBeat. “It’s basically a very elegant (Microsoft) Sharepoint in the sky.”

When you ask his investors, they all emphasize their faith in Levie and his founding team. Levie is a bit like a Tasmanian devil at times with an uncontrollable amount of energy. He speaks rapidly and he doesn’t pull punches when cracking jokes about Microsoft. When he speaks he gesticulates furiously, flinging his arms and hands around (and making it difficult to shoot photos). Even while sitting, you can tell he’s having trouble staying still. Whenever I see him, he always seems to have a coke or some kind of sugary beverage in his hand — as if he needed any more energy already.

Even with his energetic quirks, he seems to be a shrewd enough business person. That’s a good thing for his company, too, since the space is still hyper competitive with many new cloud computing companies emerging. Box.net was hardly the first company to its hand at online storage. But that pivot to the enterprise — which the company has flaunted in its branding relentlessly — was a product of Levie’s awareness and vision, Stein said.

Draper Fisher Jurveston, one of the company’s earliest investors, took a gamble on the company back when it was still geared toward consumers. After switching to a more enterprise-focused strategy, the company has spread like wildfire. 63 percent of Fortune 500 companies used Box.net in February 2011, which rose to 73 percent by July and 77 percent as the company announced on Wednesday.

“When your batter is knocking out home runs, you don’t mess with his batting stance,” Koplowitz said. “They made the right call. Levie’s the right guy for the job and he can probably take it as far as he wants.”

Whenever you ask Levie if the company will start including typical consumers in its marketing strategies, he says his company is focused exclusively on the enterprise. It’s obvious that Box.net has some consumer-facing potential. Students, for example, could use it to share assignments and bands can use it to collaborate on songs. Box.net’s even working to pre-load its software on Samsung and Motorola tablet computers, which are as popular among consumers as they are in the enterprise.

Still, Levie has no interest in pursuing consumers.

“People don’t want to lock down content in the enterprise, they want to be able to do whatever they want with it,” Levie said. “Sure, consumers can use it, but there’s always going to be much more potential for something like this in opening up the enterprise and opening that content up.”

That kind of mission should sound at least a little familiar. Facebook chief executive Mark Zuckerberg unveiled Facebook’s new Open Graph at its annual developer conference. It’s the company’s goal to connect just about everything on the Internet and make it easy to share content. It’s the same mission Box.net is hoping to complete, but in a completely different area. After all, it’s not like Zuckerberg is out there parading Facebook as an enterprise solution.

The similarities between Zuckerberg and Levie don’t stop there.

“We have a thing for fiery CEOs in their mid twenties, I guess,” said Bischof, who has also invested in Facebook.