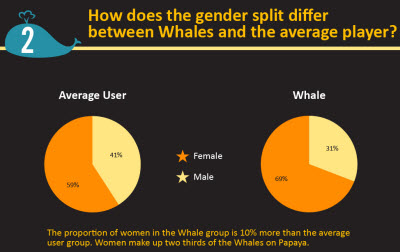 As is customary in games, PapayaMobile depends heavily on the tiny proportion of users who pay for goods in social mobile games. But one of the surprises is that some of the most enthusiastic customers, known as “whales,” are for the most part women. Papaya found that 69 percent of its big spenders in games are women.

In hardcore games, most of the fanatical customers are men. But many social mobile games appeal to women more than men. The data from Beijing-based Papaya shows that when the content suits women, they can be big spenders on games as well. Whales are extremely important to game companies, as Papaya says they account for 60 percent of revenue. 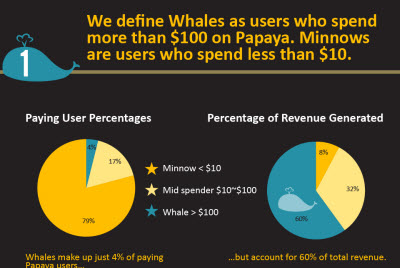 Papaya makes both a social mobile networking platform and the games that use that platform.Other game developers also use the Papaya platform to make their games more social. 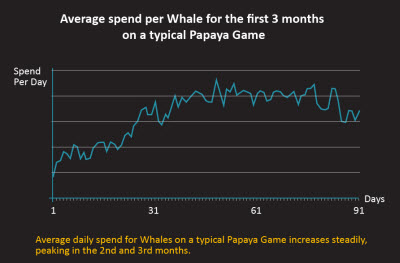 Whales, it seems, have a profound lack of patience. About 86.9 percent of the money that whales spend on consumables is dedicated to accelerators, or things that speed up processes in a game. You can, for instance, accelerate the construction of a building in a game by purchasing an accelerator. About 7.5 percent of consumables purchased by whales are bonus items, while 0.6 percent are time savers.

As you can see in the chart at the right, the average spending by whales peaks in the second and third months of playing a Papaya game. Minnows, on the other hand, spend more than whales in the first four days after downloading a game. Then the minnows stop spending.

In general, Papaya concludes that whales, particularly women, help drive monetization by extending the time of engagement with an app and by generating more revenue over a long period of time.