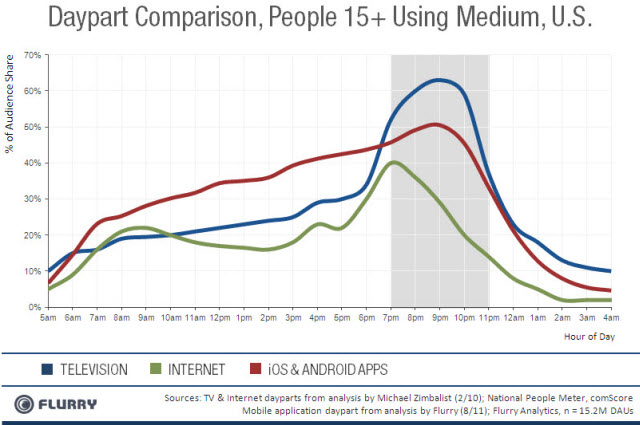 Mobile app usage peaks at around 7 pm during the day, according to the mobile analytics firm Flurry. The data shows that, just as there is with television, there is a prime-time for mobile apps as well.

Mobile app users generally use their apps from 3 pm to 10 pm, with the peak time being around 7 pm. That’s slightly off from the usual television prime-time, which lasts from around 7 pm to 11 pm. By comparison, the prime-time for the internet is around 3 pm to 11 pm. Advertisers will find that particularly interesting, as it suggests that they might profit by advertising on mobile apps during certain times of the day.

With TV, advertisers seek to target audiences as efficiently as possible. For instance, they could target 24-year-old to 35-year-old females during prime-time TV shows that reach that audience. For TV, prime-time is the period that attracts the most viewers and has the most lucrative advertising. For radio, driving time is the most valuable “daypart.” On the internet, the evening is the most active time.

Flurry tracks 110,000 mobile apps on Android, iOS, Windows Phone, BlackBerry, and J2ME phones. Flurry looked at apps such as games and social networks that are used by more than 15 million consumers (15 years and older) a day. The source for the internet and TV data is Michael Zimbalist, vice president of research for the New York Times.

Overall, compared to TV viewing and internet usage, mobile app usage is higher from 6 am to 6 pm. Mobile app usage starts sliding downward fast around 9 pm. From 7 am to 10 am, the percent of mobile app users who are using apps is greater than that of mobile internet users. During 10 am, roughly 30 percent of mobile device owners use an app during that hour. One day, Flurry says, advertisers will be able to target a tightly defined audience that uses different apps. Flurry also notes that the number of users who sign on to mobile apps from 7 am to 11 pm is equivalent to 17 American Idol finale show audiences.