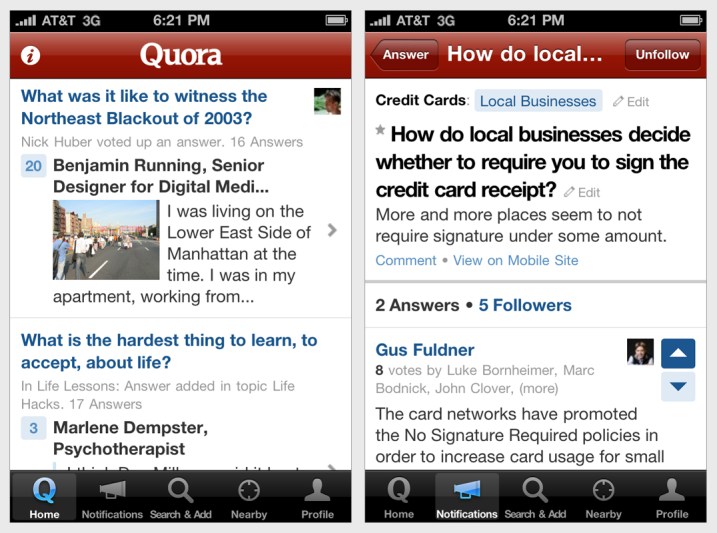 Quora, the much buzzed-about social question-and-answer service, has released an app for the iPhone and iPod Touch, ending a long period of relative quiet from the company since it opened to the public over a year ago.

Quora users have long been able to use the company’s mobile-optimized HTML site, but a native app was one of Quora’s most popular requests.

I’ve been testing the beta version for nearly two months now and can confidently say that with its various new features, it finally delivers the goods to both casual users and more actively engaged ones. The site, known for its patronage by prominent Silicon Valley insiders and other noteworthy people, is maturing into the authoritative tome of knowledge its co-founders, former star Facebook engineers Adam D’Angelo and Charlie Cheever, originally envisioned.

When it debuted, Quora’s steep learning curve and elite user-base seemed too intense for some casual knowledge-seekers. But this app hopes to change all that. Here’s a look at some of its best new features and how they work:

Location-based Searches: The geolocation-aware “Nearby” feature pinpoints where you are on a map and brings up topics relevant to that area. This information is based on the crowd-sourced efforts of Quora’s web users, who assigned map locations to topics manually. The Nearby feature is useful for anyone on the go, especially travelers. If you’re heading to Shanghai, for example, you can use Nearby to find out which culture faux pas to avoid.

You can also move the map around to, “explore the world through the lens of Quora” according to mobile lead Anne Halsall. That experience is the type of novel app-candy more hardcore users of the site will definitely appreciate. 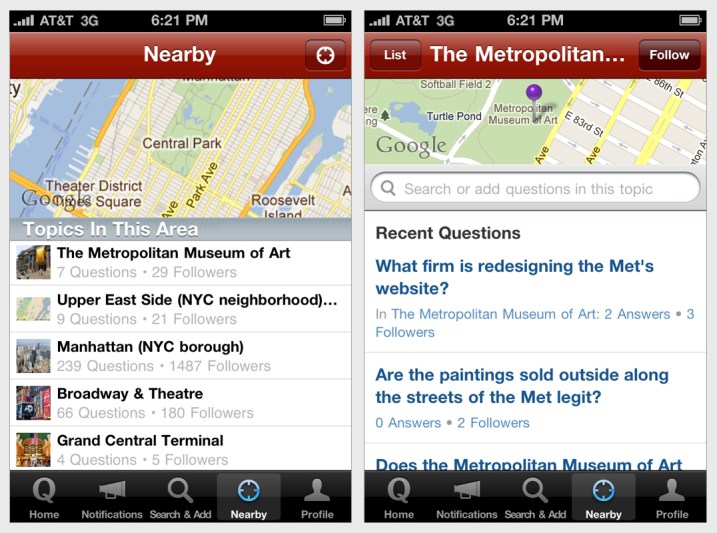 Speedy Response Times: The app is certainly fast enough to rival other sources of content — great when an answer is needed quickly. This is one of the most polished iPhone apps I’ve had the pleasure of using. Not only is it wicked fast, it’s also devoid of the usual opening-day bugs and crashes.

Refreshing content and notifications takes just a quick second, and page loads are just as lightning-fast. Search queries are similarly responsive. This is mostly thanks to predictive, pre-fetching systems that use pre-rendered web views, as well as tight integration with Apple’s Core Data development framework.

Slick User Interface: The app’s user interface borrows heavily from Quora’s cleverly streamlined website. Like the website’s singular search bar for all user input, one tap on the “Search & Add” tab allows you to write a post, search for Q&A pages (and users and topics) or ask a question if it wasn’t already there. There are convenient sharing options for questions and answers, say on Twitter, Facebook or a personal blog. Almost the entire site is squeezed onto the 3.5-inch iPhone screen, a departure from some other mobile apps that sacrifice features and content for portability.

Notifications: The Notifications tab takes you to a discrete page that lists any new answers to your questions, follower announcements and other alerts. If you’re outside of the app, push notifications will draw your attention back — useful when you’re away from your computer or have disabled email notifications from Quora.

Time-killing Shuffle Option: The mobile app also ports over the website’s Shuffle feature, which was mostly a novelty before. Its revamped implementation on the mobile app makes much more sense, since it’s a great way to kill time on your smartphone. Shuffle’s results are random at the moment, but the feature may be tweaked to support individual preferences in a future update.

An active member of Quora myself, I’ve found the app to be useful in a number of situations. My feed is packed with great reading material whenever I’ve got a free moment (side-note: many users have confessed to me that Quora has become their defacto bathroom reader). I can also ask questions (and hopefully get answers) as soon as they pop into my head. Lastly, I can resolve those pesky barroom debates that usually rely on Wikipedia or Google to break the impasse. The speed of this app makes “Let’s see what Quora has to say about that, mister!” a reality. It also helps that the service has been around long enough for it to be populated with good content.

I asked head of marketing, community and business operations Marc Bodnick about the site’s metrics and other information on traffic and revenue, but he was mum on the details. He did however stress that New York City is now its largest user-base by geography, proving that Quora’s starting to shed its Silicon Valley roots.

Bodnick said a tablet-optimized iPad app is still off the shelf for now, as are non-iOS platforms such as Android. “We want to bring the site to all the platforms our users embrace, but we do not have a specific timetable for any of those efforts,” he added.

Like Quora’s desktop site, the new app is available for free with no advertising. You can get it on the iTunes Store here (currently in English-speaking countries only).