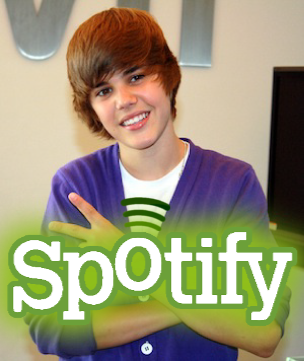 Spotify, which allows people to share playlists with friends, recently partnered with Facebook to offer integration with Facebook’s new Open Graph platform. One aspect of the new integration is automatically sending notifications to Facebook of whatever song you’re listening to in real-time.

The new Facebook integration made many Spotify users angry for fear of being ridiculed for their music selection. For example, you can imagine the embarrassment VentureBeat editor Dylan Tweney would feel if the entire staff discovered that he listened to Rebecca Black’s “Friday” 12 times in a single hour — (hypothetically speaking, of course).

“We’re rolling out a new client as we speak where you can temporarily hide your guilty pleasures. It works like a browser’s private mode,” said Spotify CEO Daniel Ek in a Tweet earlier today.

Spotify isn’t the only streaming media service that plans to automatically update Facebook with whatever you’re watching/listening/reading. Streaming video services Netflix and Hulu, as well as several news publications like the Wall Street Journal, are also offering integration with Facebook’s Open Graph.

Although Spotify is the first to add a blanketed “private mode”, it’s something I think a lot of services will end up doing in the future.