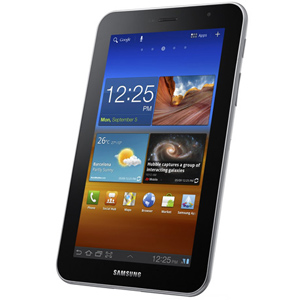 Samsung has updated its 7-inch Galaxy Tab with better specs like a dual-core processor and Honeycomb Android OS, the company said today. It’s calling the upgraded device the Galaxy Tab 7.0 Plus. The Galaxy Tab, first released at the end of 2010, was the first Android tablet Samsung brought to market in the U.S.

The tablet market got big news earlier this week when Amazon announced its $199 Kindle Fire, a 7-inch Android tablet connected with Amazon’s extensive services and built for e-reading, web browsing, streaming shows and more. Samsung’s decision to update its 7-inch tablet was already in the works before the Kindle Fire announcement, but it will likely have a hard time competing with that price point.

The Galaxy Tab 7.0 Plus has some nice specs. It includes a 1.2-GHz dual-core processor, 1GB of RAM, a 3-megapixel rear camera, a 2-megapixel front-facing camera, a microSD card slot and 16GB or 32GB of on-board storage. The tablet runs a TouchWiz-enabled version of Android 3.2 (Honeycomb), which is optimized for tablets.

Samsung hasn’t mentioned pricing yet, but because the original 7-inch tablet with Wi-Fi only is priced at $349.99, expect a similar base price on the new model. Pricing will escalate with more storage and data networking abilities.

The Galaxy Tab 7.0 Plus will first launch in Austria and Indonesia at the end of October and will likely launch in the U.S. and other countries later this year. It will face steep competition this holiday season from the Apple iPad 2 on the high end and the Amazon Kindle Fire on the low end.

Are you interested in the Galaxy Tab 7.0 Plus, or are you more attracted to something like the Kindle Fire?