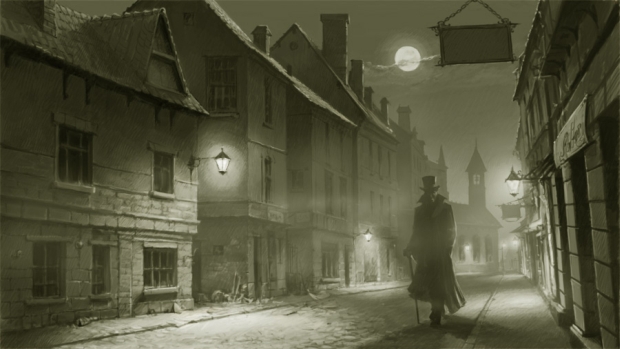 Gothic horror is one of my favorite genres in any media, from literature to film. Unfortunately it isn't represented very often in games. It's a travesty if you ask me, and I do my best to rectify that with this entry in the September writing challenge.

WILKES stands by the window glancing between the dark outside and his pocket watch. GEORGE sits in a leather chair by a lit fire place.

I don’t like this. Richard should have been here quarter of an hour ago.

Relax. I’m sure he merely lost track of the hour.

Zoom in on WILKES face. Fading daylight shines through the window behind him.

We both know that cannot be the case. If ever there was a man obsessed with punctuality it’s Richard. Especially when the situation is this dire. Are you sure you told him the correct time?

The camera cuts to GEORGE. He sinks back into his chair. Shadows and uncertainty taking root on his face.

Of course I told him the correct time! I told him about this meeting personally.

Well we can’t simply sit here and do nothing.

WILKES walks toward the door, grabbing his top hat and walking cane from a desk along the way. GEORGE rises from the chair uneasily. He looks out the window WILKES just vacated before returning his attention to his friend.

You can’t be serious Wilkes. It’s almost dark for God’s sake. I wouldn’t go out there with an army behind me.

WILKES pauses in the doorway.

Richard is our friend, and he could be in mortal danger while we uselessly wait.

GEORGE hesitates for a moment.

Wait here in case Richard arrives. This could all just be my imagination running away with the situation.

Yes. If I’m not back in an hour, contact the others. Assume the worst and proceed without Richard and myself. We cannot allow this evil to grow unchecked.

Hopefully I won’t need it.

WILKES disappears from the doorway leaving GEORGE to collapse back into his chair. The camera fades out as GEORGE stares into the flickering fire.

WILKES has two ways to get to RICHARD’S house. The safest route is to stick to well-lit and traveled streets. The evil isn’t powerful enough to make its presence openly known. The fastest route is through back alleys. The evil presence, ever watchful, will attempt to kill WILKES if it can corner him. WILKES’ only means of self-defense is his walking cane. The cane can temporarily stun the creature. WILKES will run through alleys, but he will only walk through the streets because he doesn't want to draw attention to himself. The level is seen from the perspective of the evil presence. It watches WILKES from the rooftops while he is on the main streets, and descends to street level to chase WILKES through alley ways.

If WILKES takes too long in getting to RICHARD’S house he will discover a physical manifestation of the evil presence killing RICHARD (it is hound like in shape with a wide, jagged maw and tendrils of inky darkness sprouting from its back). If WILKES makes it quickly enough he will be in time to aid RICHARD.

When gameplay resumes at RICHARD'S house the camera returns to its default third person perspective.

If WILKES saves RICHARD the creature will flee, not wanting to confront more than one person. Its weakness brings cowardice. A short conversation ensues.

God above man! If you hadn't gotten here when you did…

Let's not think about it. We need to get to George's. Now.

I just need my research. It'll help send that thing back to hell.

Hurry. It seems time isn't on our side.

If WILKES is too late, he is cornered by the creature. He cannot kill it, but he can still stun it with his cane. It is also afraid of fire. WILKES can either attempt to light the creature or the house on fire with oil lamps inside RICHARD'S house. WILKES merely needs to escape back to the street, but he will find valuable information relating to the evil if he can manage to search RICHARD'S house. The creature is fast and can travel between shadows. It attacks by leaping onto WILKES and biting him or grabbing at WILKES with its tentacles.

No matter how WILKES handles the situation, the level ends when WILKES (and RICHARD if applicable) return to GEORGE'S house to decide their next move. Three different conversations can follow depending on if WILKES saved RICHARD, if WILKES was too late but discovered the RICHARD'S research, or if WILKES was too late and only escaped with his life.