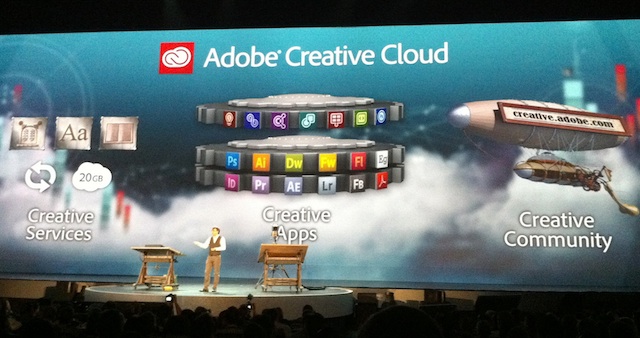 Adobe today announced its Adobe Creative Cloud service, a new way to share creations as well as access the company’s applications and creative services. The service will launch in early 2012 and be available for a monthly subscription fee.

Creative Cloud members will be able to sync, collaborate, get feedback and share work they create with Adobe software, including its six new mobile Touch Apps, the various Adobe Creative Suite applications, and its HTML web design tool Muse (currently in beta). A subscription will come with 20GB of remote storage.

In addition to sharing features, Adobe Creative Cloud subscriptions will give users access to the full Creative Suite — including heavy hitters such as Photoshop, Illustrator, Premiere Pro, and InDesign — and any software updates as part of the monthly fee. The software itself will be installed on your computer or mobile device, not hosted in the cloud. These applications will still be available to buy as standalone products.

The final element of the Creative Cloud is access to services such as Adobe’s Digital Publishing Suite, Adobe Business Catalyst and the new web-based font tools that the company acquired with today’s purchase of Typekit. These three services will be included at launch, but the company plans to add more over time.

“The move to the Creative Cloud is a major component in the transformation of Adobe,” said Adobe CTO Kevin Lynch in one of today’s many press releases from the company.

The announcement, made today at Adobe Max, the company’s annual developer’s conference, didn’t include details on how much the service would cost. A beta version of Adobe Creative Cloud will roll out in November for mobile app users, though it will be limited to the sharing features. Adobe promises to release more details on the service in early November.