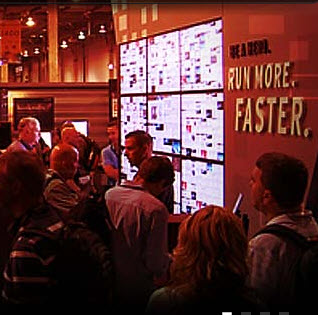 The demand for accessing data keeps going up and up. That’s why Fusion-io has grown quickly by selling flash-based memory systems for data center servers. Today the company is introducing its second-generation ioMemory products to double its performance.

Flash memory chips are breaking into enterprise servers because of increasing reliability and faster performance compared to hard drives. Fusion-io rode that wave with an ioDrive first introduced four years ago. Now the company is introducing its ioDrive 2 single and dual configuration flash cards, which can dramatically speed up the time it takes to load your web pages without overheating a server.

“It’s really quite a feat to use the dense memory of flash and its better performance in the data center,” said David Flynn, chief executive of Fusion-io, in an interview. “With flash, we are finally seeing a shift for data-intensive applications.” 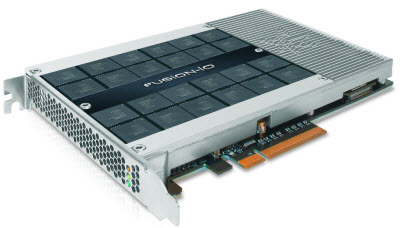 The company made the announcement at the start of the Oracle OpenWorld conference in San Francisco. Fusion-io, based in Salt Lake City, was founded in 2005, debuted at the DEMO conference in fall 2008, and went public this summer by riding on the trend of relieving the data crunch in servers. Fusion-io makes memory cards (pictured below) with speedy flash-memory chips on them. The company recently acquired IO Turbine and reported revenues of $197.2 million for the fiscal year ended June 30, up 445 percent from a year earlier. Earnings were $4.6 million, compared to a loss of $32.5 million a year earlier.

The flash card puts memory where it’s needed, close to the server’s microprocessor, which needs a constant stream of data to stay at peak processing speed. This significantly reduces latency, or the time it takes to fetch data back and forth from memory, compared to getting data from a combination of random access memory chips and hard disk drives. 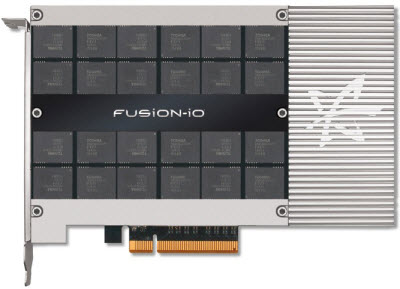 Fusion-io designs the controller technology for the flash chips and sources the chips from commodity flash manufacturers. The secret sauce lies in the controller chip, which manages all of the different memory chips on a circuit card, which plugs into a server. Fusion-io also creates the virtual software stack that integrates the memory into the computer system, Flynn said.

“That’s why we can run applications so much faster on the servers,” Flynn said.

The new drives have a 15-microsecond write latency, 3 gigabytes per second bandwidth, over 700,000 read input output operations per second (IOPS), and 900,000 write IOPS. The cards are more reliable because they have a self-healing feature called Adaptive FlashBack, which enables the ioMemory to repair itself in case one chip fails. What does all of that mean? One card can transfer an entire DVD in less than 2 seconds, Flynn said.

Corporations such as Facebook are already using the first generation products in large amounts and are expected to use the new generation for trading platforms, enterprise resource planning systems, virtual environments, enterprise applications, and databases, Flynn said. He said that the speed of the performance will likely enable new applications that could never be done before.

It is not that hard to understand why getting data out of flash memory instead of slower hard drives is important. Facebook recently launched its Timeline feature, which gives users access to their entire history of Facebook posts at a glance. If you scroll down the Timeline web page, you can see just about every important event in your Facebook history. That data would normally be stored in archives, which could be stored on slower hard disk drives or even tape storage. But now that data has to be accessed in a split second, so it makes sense that something like the faster flash memory chips would be used. The chips can also be used to keep stock exchanges and other financial companies operating at full tilt.

Fusion ioDrive2 and ioDrive2 Duo will be offered in 365 gigabyte (GB), 785 GB, 1205 GB and 2.4 terabyte capacities, beginning in November. The first production run is already allocated to existing customers. Pricing for Fusion’s new ioMemory platform starts at a manufacturer’s suggested retail price of $5,950. Fusion-io has more than 500 employees now.