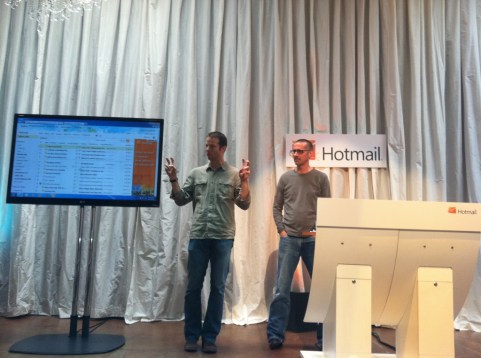 Microsoft’s Free email service Hotmail is unveiling a number of changes to its inbox, helping you fight the war against what it calls “Greymail.” The changes start today with a new Hotmail Android app, and will continue into the month of October.

The U.S.’s perception of Hotmail is different than the rest of the world’s, according to Dick Craddock, Hotmail’s partner group program manager. The company is attempting to revamp not only its inbox, but also the way people think about Hotmail worldwide. Currently, Hotmail is the number one email provider across the globe, and number three behind Yahoo and Google’s Gmail respectively in the U.S.

“We have hit the point where the problem is perception and word and not the core features of the product,” said Chris Jones, corporate vice president of Windows Live at Hotmail’s press event.

VentureBeat was at the event to get a preview of the new features Hotmail is introducing.

These features concentrate on the battle against “graymail,” which Hotmail defines as all email you may want to look at eventually, but that often clutters your inbox. It can include newsletters, deals offers, social media updates and more. These are some of Hotmail’s new tools:

“Instant Actions” appear when the mouse hovers over a particular message. You can choose to delete, move and mark as unread, flag and more dependent on your preferences. You can customize what appears when you hover and choose specific actions for each folder.

Flagging will now pop a flagged message to the top of your inbox and keep it there until you unflag it.

Sweeping, however, is the most powerful of these features. With sweeping, you can tell Hotmail to delete or move any email based on set parameters, such as email older than three days (which will come in handy for those deals emails that expire after a few days) or from specific senders.

The sweeping engine also recognizes specialized emails such as newsletters or social media announcements and moves them to a folder without you having to set a rule for each of the companies that send you a newsletter.

On the surface, these features seem fairly expected. Jones admitted that since 2006, the company saw users “growing out” of the Hotmail services, throwing the mail provider in a game of catch-up. In the last five years the company tackled storage issues, employed Smartscreen’s spam filter, and launched mobile apps. Ease of mobile access has increasingly become an consideration for people choosing an email provider as cell phones become a main tool for checking mail.

Craddock claims people will receive 1000 more emails next year than they do this year and to tackle that, Hotmail plans to be in it for the long haul. The company wants to give ease-of-use and a sense of power back to its 350 million worldwide users.

With those numbers, Jones doesn’t think Hotmail or another other email is going anywhere.

“There are people who say email is dead and I say, ‘not in my life.'”