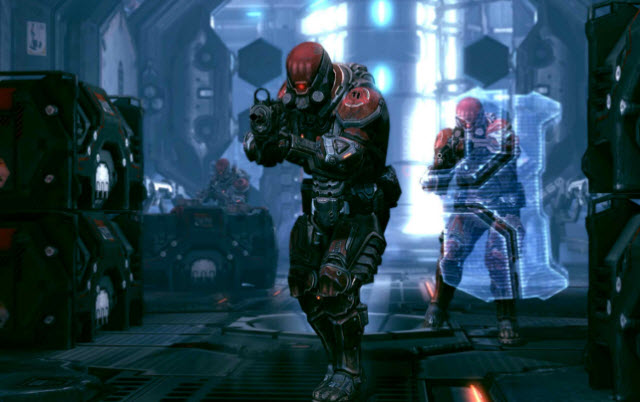 After more than five years in gestation, id Software’s Rage video game hits the stores tonight. Lucky for fans of first-person shooter games, it is one of the best games I’ve played in a while. 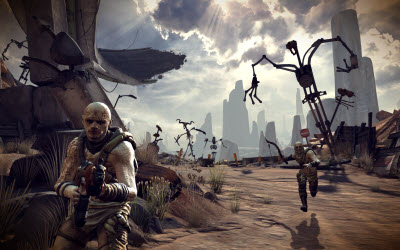 The title is a breakout achievement for id Software, which has focused on making first-person shooters with high-intensity graphics.  While id has won kudos for its technology, it hasn’t always gotten the highest marks for story and depth of game play.

But Rage is not only a technologically advanced shooter; it’s also a game with deeper role-playing, adventure and racing elements. And it has a story that will hold your attention, even though it starts out fairly slow. In that sense, Rage is a creative mash-up, blending just enough things together to come off as an original game rather than a copycat. The game bears the mark of a seasoned video game development studio that is finally hitting its stride. When you look at the polished details in this game, you can tell it comes from two decades of experience. That’s very important, considering competition this fall from Gears of War 3, Resistance 3, Call of Duty Modern Warfare 3, Battlefield 3 and others.

A world of variety and mash-ups

Rage takes place in a near-future post-apocalyptic world where survivors brave ruins and wastelands after a meteor hits the Earth. The sci-fi game is a cross of some recent role-playing games such as Fallout 3 and Borderlands, but it is a far better shooting game than either of those, mostly because the graphics are better and the enemies are smarter. Despite the futuristic setting, the Southwestern accents and Wild West environment make it feel a lot more like a Western than a sci-fi story. That’s a far cry from corridor-based shooting games like Doom, Quake, and Wolfenstein. I used to enjoy those games immensely when I was younger. But, like other id fans, I want something more from a game now. I’m glad that id recognized that and put so much effort into Rage.

It’s hard to believe that this intricate and immersive world came from the game studio that brought us Doom, which was all about shooting. In some sense, Rage is a classic id Software game, thanks to its searing violence. Rage is a mature-rated title that you don’t want to share with your youngsters. There are plenty of “f bombs,” severed body parts, and bloody endings. But the game stops short of the kind of horror-style of games such as Electronic Arts’ Dead Space.

The blending of the different story, genre and game play elements is what makes Rage so interesting to play. You’re not stuck doing the exact same thing over and over in the game. First and foremost, it is a fun first-person shooting game. There doesn’t seem to be much of a story at the start. But if you stick with the game, the story starts to gel and you find out who you are in the game. You spend a lot of time exploring the Wastelands, collecting, engaging in car combat, and meeting the human settlers. Just collecting and building gadgets is an entertaining way to pass the time. 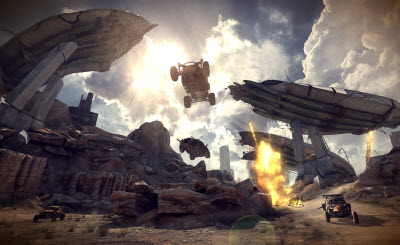 In this desert world, you have to scavenge for everything. Much like in Borderlands, you have to make your way across the Wastelands desert, hopping from one human settlement to another and fighting mutants the whole way. You have to be a pack-rat scavenger, since you have to collect parts to assemble cars, lock grinders, and bombs. As you tangle with the locals, you pick up some cool weapons like the “wingstick,” a boomerang-like device with razor blades that can sever an enemy’s head when you throw it. The wingstick can be deadly accurate and turn your enemies into sliced watermelons.

The story gets more and more interesting as you run into more memorable characters, some of whom seem like they’re from the Mad Max series of Road Warrior movies. Clans have taken over lawless territories, while a power known as The Authority tries to assert control over everything. In response, a resistance force has emerged. It turns out that, as an asteroid made its way toward Earth, the government created an elitist program, putting some people into a cryogenic sleep deep underground. You emerge decades later, sort of like astronauts returning to Earth, only to discover that the apes have taken over, like in the film Planet of the Apes.

None of this is evident at the beginning of the game, so you play for a considerable amount of time in a state of befuddlement. That adds a bit of mystery to the question of who you are and what you are doing here. As you interact with characters, you find out more about yourself, since they treat you as somebody who is different from the very beginning. You find that the future runs on a barter system. If you need something from someone, they will give it to you only if you can trade. Almost always, they are looking out for themselves. So you have to run around doing jobs for them in order to get what you need. 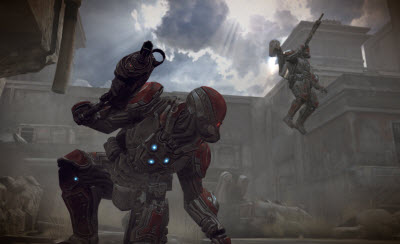 The obese Jabba the Hut-style character JK Stiles runs a carnival-like gladiator’s arena, where you have to kill a bunch of mutants in arena combat to earn money and an alliance with Stiles. The Stiles episodes are comical, even though you can get into some horrific firefights with the mutants. You have to deal with him because you need him to sponsor you in a high-reward race.

The characters you meet will send you off into different settlements of the world. Just about anybody can set you up with a mission. If you walk up to a character, chances are they will ask you to help find a missing friend or relative somewhere in the desert.