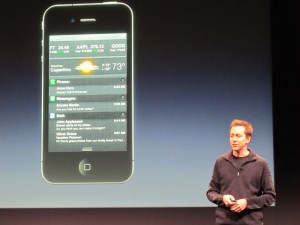 Today’s Apple event had little by way of new features available in iOS 5, but did recap what we can expect next Wednesday when we all plug into iTunes.

According to Scott Forstall, Apple’s senior vice president of iOS Software, who took the stage to talk iOS, the new release has over 200 new features to offer. Here are the top ten features he highlighted:

Better Notifications: iOS 5 will include the new Notification Center, which can be accessed by swiping your finger downward on any iPhone screen. You can customize which notifications appear, including emails, texts, Game Center updates and weather. The point is to make notifications less like that interrupting cow in your knock knock joke.

iMessage: The new messaging feature allows iOS users to communicate over 3G and Wi-Fi with any iPhone, iPod Touch or iPad running iOS 5. You will be able to send photos and video, receive message delivery and read receipts, and see when others are typing. iMessages are synced to all of your devices, so you can pick up a conversation where you left off. Apple also promises your messages will be encrypted end-to-end for security.

Reminders: For the forgetful among us, reminders combines to-do lists and reminders. The feature can alert people to the simple things such as, “Pick up your dry cleaning,” or, “Your mother-in-law has been at the airport for an hour, prepare to sleep on the couch.” You can also set up a geofence around an area, that will set off a reminder once you leave that space. Reminders sync with Outlook, Apple’s iCal and iCloud so that they’re available across all of your devices.

Newsstand: All of your favorite news publications, such as the New York Times, the New Yorker and Allure, are aggregated into a special folder on your home screen iOS device called newsstand. Apps purchased in the Newsstand section of the App Store automatically download to this folder. While you’re going about your business, Newsstand continues to download new content from your subscriptions.

Camera: When you need to whip out your camera and grab that fleeting shot of a seagull flying in front of the setting sun, you don’t want to wait to unlock your phone and access the camera. Apple’s answer to that is a shortcut in iOS 5 that doesn’t require you to enter a lock code to take a picture — just double click on the home screen and hit the Camera button. iOS 5 will also have new camera features, including auto focus and exposure lock, a rule-of-thirds grid overlay, pinch-to-zoom and the ability to use the volume up button as a shutter release button. On the other side, there are finally editing options to clean up pictures after you take them, including red eye removal, cropping and auto levels.

Game Center: We’re all about content discovery lately, and gaming is the next frontier. iOS 5 is rolling out game and friend discovery to its over 67 million Game Center users. A sequel to Infinity Blade by Epic Games is also coming out, made specifically for the new iPhone 4S.

New Safari: Forstall says, “”This next feature is one of my favorite: Tab browsing.” Tabbed browsing is just as it sounds, a way to switch between pages you’re reading simultaneously, like you do on a desktop. If you don’t have time to read a page, you can now “save” that page for later with the Safari Reader tool. Saved articles will be synced across all of your devices with iCloud, so you can pick up an article on your iPad where you left off on your iPhone.

Mail: The iOS Mail app will be more like a traditional email inbox! iOS 5 allows you to flag messages, search your whole inbox and write emails with rich text formatting, including bold and underlined fonts.

PC Free: Cast off the chains tying your mobile to your computer! With iOS 5, iPhone, iPad and iPod touch users will no longer have to physically connect to a computer in order to activate their new devices or download important iOS updates. And with iCloud, you can backup photos, email, and other data wirelessly as well.

Look out for the iOS update next week.

[Some photos by Christina Bonnington and Brian X. Chen/Wired.com]