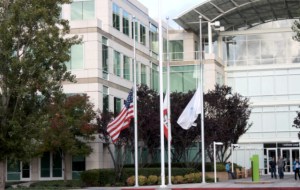 Apple co-founder Steve Jobs died today at the age of 56, and reactions, statements and tributes from admirers, friends, co-workers, the media, and even the president have started pouring in. We will update this post as more reactions come in throughout the night.

The flags have been lowered to half-mast at Apple’s Cupertino headquarters (right).

In his public life, Steve was known as a visionary; in his private life, he cherished his family. We are thankful to the many people who have shared their wishes and prayers during the last year of Steve’s illness; a website will be provided for those who wish to offer tributes and memories.

We are grateful for the support and kindness of those who share our feelings for Steve. We know many of you will mourn with us, and we ask that you respect our privacy during our time of grief.

I have some very sad news to share with all of you. Steve passed away earlier today.

Apple has lost a visionary and creative genius, and the world has lost an amazing human being. Those of us who have been fortunate enough to know and work with Steve have lost a dear friend and an inspiring mentor. Steve leaves behind a company that only he could have built, and his spirit will forever be the foundation of Apple.

We are planning a celebration of Steve’s extraordinary life for Apple employees that will take place soon. If you would like to share your thoughts, memories and condolences in the interim, you can simply email rememberingsteve@apple.com.

No words can adequately express our sadness at Steve’s death or our gratitude for the opportunity to work with him. We will honor his memory by dedicating ourselves to continuing the work he loved so much.

Michelle and I are saddened to learn of the passing of Steve Jobs. Steve was among the greatest of American innovators – brave enough to think differently, bold enough to believe he could change the world, and talented enough to do it.

By building one of the planet’s most successful companies from his garage, he exemplified the spirit of American ingenuity. By making computers personal and putting the internet in our pockets, he made the information revolution not only accessible, but intuitive and fun. And by turning his talents to storytelling, he has brought joy to millions of children and grownups alike. Steve was fond of saying that he lived every day like it was his last. Because he did, he transformed our lives, redefined entire industries, and achieved one of the rarest feats in human history: he changed the way each of us sees the world.

The world has lost a visionary. And there may be no greater tribute to Steve’s success than the fact that much of the world learned of his passing on a device he invented. Michelle and I send our thoughts and prayers to Steve’s wife Laurene, his family, and all those who loved him.

I’m truly saddened to learn of Steve Jobs’ death. Melinda and I extend our sincere condolences to his family and friends, and to everyone Steve has touched through his work.

Steve and I first met nearly 30 years ago, and have been colleagues, competitors and friends over the course of more than half our lives.

The world rarely sees someone who has had the profound impact Steve has had, the effects of which will be felt for many generations to come.

For those of us lucky enough to get to work with him, it’s been an insanely great honor. I will miss Steve immensely.

“From the earliest days of Google, whenever Larry and I sought inspiration for vision and leadership, we needed to look no farther than Cupertino. Steve, your passion for excellence is felt by anyone who has ever touched an Apple product (including the macbook I am writing this on right now). And I have witnessed it in person the few times we have met.  On behalf of all of us at Google and more broadly in technology, you will be missed very much. My condolences to family, friends, and colleagues at Apple.” — Sergey Brin, Google

“Steve, thank you for being a mentor and a friend. Thanks for showing that what you build can change the world. I will miss you.” — Mark Zuckerberg, Facebook

“I am very, very sad to hear the news about Steve. He was a great man with incredible achievements and amazing brilliance. He always seemed to be able to say in very few words what you actually should have been thinking before you thought it. His focus on the user experience above all else has always been an inspiration to me. He was very kind to reach out to me as I became CEO of Google and spend time offering his advice and knowledge even though he was not at all well. My thoughts and Google’s are with his family and the whole Apple family.” — Larry Page, Google

“I want to express my deepest condolences at the passing of Steve Jobs, one of the founders of our industry and a true visionary. My heart goes out to his family, everyone at Apple and everyone who has been touched by his work.” — Steve Ballmer, Microsoft CEO

“True genius is measured by the ability to touch every person on the planet. Steve did that, not just once, but many, many times over his amazing life. We at Intel were privileged to have known him and worked with him as he brought his creations to life. Our hearts go out to his family and to his many friends and co-creators throughout the world.” — Paul Otellini, CEO of Intel

“Steve Jobs was an extraordinary visionary, our very dear friend and the guiding light of the Pixar family. He saw the potential of what Pixar could be before the rest of us, and beyond what anyone ever imagined. Steve took a chance on us and believed in our crazy dream of making computer animated films; the one thing he always said was to simply ‘make it great.’ He is why Pixar turned out the way we did and his strength, integrity and love of life has made us all better people. He will forever be a part of Pixar’s DNA. Our hearts go out to his wife Laurene and their children during this incredibly difficult time.” — John Lasseter, Chief Creative Officer & Ed Catmull, President, Walt Disney and Pixar Animation Studios

“Steve Jobs was a great California innovator who demonstrated what a totally independent and creative mind can accomplish. Few people have made such a powerful and elegant imprint on our lives. Anne and I wish to express our deepest sympathy to Steve’s wife, Laurene, and their entire family.” – Jerry Brown, Governor of California

“May Steve rest in peace. My deepest sympathy to his loved ones. No CEO has done more for his customers, employees, and shareholders than Steve. He changed the world–my world, your world, the entire world. His words to live by: “There must be a better way.” You changed our lives, Steve, and you showed us that there is a better way…we will miss you.” — Guy Kawasaki, CEO of Alltop:

“There aren’t enough words to describe what Steve has done, he defines a generation. I hope that everyone will respect his privacy and will respect his family’s privacy. For apple this will be business as usual. For all intents and purposes, we knew Steve was sick, but we had no idea he was this sick. This is a tremendous loss of an icon for the tech community, but it’s not the time to dismiss Apple.” — Michael Gartenberg, analyst at Gartner

“Even when I worked for 15 years for Bill Gates at Microsoft, I had a huge admiration for Steve and what Apple had produced.  But in the end, when I think about leadership, passion and attention to detail, I think back to the call I received from Steve Jobs on a Sunday morning in January. It was a lesson I’ll never forget. CEOs should care about details. Even shades of yellow. On a Sunday. To one of the greatest leaders I’ve ever met, my prayers and hopes are with you Steve.” — Vic Gundotra, senior vice president of Social at Google, on Google+

“Steve was one of a kind. For many of us working in technology and entertainment, Steve was a new kind of hero that lead with big, bold moves and would not settle for less than perfection. He is the best role model for a leader that aspires to be great.” — John Riccitiello, CEO of EA

“His death is a huge loss for the creative community. If you think about how many creative things that were made using Apple products… Steve Jobs is probably the biggest influencer there is.” — Joe Fernandez, Klout CEO

“As an immigrant, Steve Jobs personified everything that was great about America,” Vivek Ranadivé, a friend of Jobs and CEO of Tibco

“I’m shocked, and saddened. He’s obviously one of the century’s most important innovators and set the agenda for the tech industry for 30 years. I had mixed feelings about him as a man, as a manager. He was cool … his influence has been staggering.” — Leander Kahney, author of “Inside Steve’s Brain” and publisher of CultofMac.com

“There were few people who understood what people wanted and build something beautiful better than him. I tried to emulate him where I could, his Stanford graduation speech still rings with me to this day.” — Alexis Ohanian 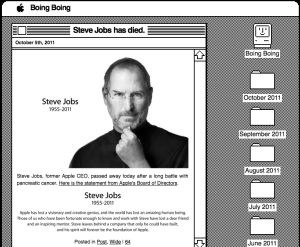 Steve’s passion for innovation and creativity will carry on for decades to come. His legacy is enormous, touching millions of people around the world. Our entire industry and economy is better for his presence and incredible contributions. On behalf of Broadcom, we send our deepest condolences to Steve’s family and to Apple employees” — Scott McGregor, Broadcom CEO

“Steve was one of a kind.  For many of us working in technology and entertainment, Steve was a new kind of hero that lead with big, bold moves and would not settle for less than perfection. He is the best role model for a leader that aspires to be great.” – John Riccitiello, CEO of Electronic Arts

“For me, Steve’s legacy won’t be limited to these breakthrough products, however. More important than the products themselves, he changed the way we think —–and how we think about something is often the hardest thing to change. This makes Steve’s successes all that much more remarkable.” — Pierre Omidyar, founder of eBay

Dmitry Dragilev, marketing lead of design firm Zurb, said Jobs had a great influence over the company. “Holy Crap. Such a shock. We have a Steve Jobs doll we pass around every morning at scrum [meetings]. Folks here are truly sad … He had a relentless pursuit of excellence: ‘My job is to not be easy on people. My job is to make them better.'”

Boingboing.com has touchingly, awesomely changed the design of its homepage in honor of Steve Jobs (above).

Google.com has a direct link to Apple’s Steve Jobs page.